The Bered MK8 is a magazine-fed light machine gun that appears in Call of Duty: Modern Warfare Remastered. It was added to the game in the June 27th, 2017 update.

The weapon is unlocked by completing the Bered MK8 bounty in the Depot. Once unlocked, it is available at all levels and is exclusive to Multiplayer.

Unlike most of the other LMGs, the Bered MK8 suffers from damage dropoff: while it kills very rapidly at close range with a 3 shot kill, it requires up to 5 shots at a distance. Owing to its high fire rate and moderate recoil, this makes the Bered a better choice for close range combat than long range. The 35 damage at close range means that the Bered is a 3 hit kill at close range, with or without Stopping Power. Stopping Power thus only serves to increase the range at which the Bered can kill in three hits. Stopping Power can still be beneficial when firing through walls, delivering head shots, or at already injured enemies, but overall Stopping Power has a smaller effect on the Bered than most other LMGs.

Being a magazine-fed light machine gun, the Bered MK8 has a shorter reload time than all other light machine guns in the game. However, its magazine size is smaller than that of other LMGs, as it carries 60 rounds as opposed to the usual 100 rounds. When coupled with the weapon's extremely high fire rate of 909 RPM, this makes reloading somewhat frequent. For this reason, Sleight of Hand can be useful, as it can cut reload time down to 2.12s (2.4s when the magazine is empty), allowing the player to continue battling without having to worry as much about the frequent reloading.

The Bered MK8 in first person 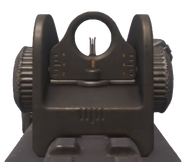 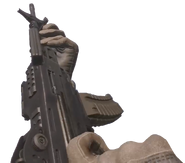 Cocking the Bered MK8
Add a photo to this gallery
Retrieved from "https://callofduty.fandom.com/wiki/Bered_MK8?oldid=2465256"
Community content is available under CC-BY-SA unless otherwise noted.