Call of Duty Wiki
Register
Don't have an account?
Sign In
Advertisement
in: Call of Duty: Infinite Warfare Lethal Equipment

"Thrown ballistic that explodes on enemy impact. Can be recovered after use."
— In-game description

The Bio Spike is a lethal equipment in Call of Duty: Infinite Warfare. Much like the Throwing Knife, the Bio Spike can be thrown into an enemy and retrieved after the kill.

It retains the crosshairs and the sound effects of the Throwing Knife, as they are very similar equipment, with the main difference being that Bio Spike explodes upon impact of an enemy body.

It is replaced by the Throwing Knife in Infected and All or Nothing.

In multiplayer, the Bio Spike is unlocked as lethal equipment at level 50. It deals the same damage as a regular Knife, it's explosive impact radius is small, but the explosion will always result in a kill if caught in that radius.

Players will receive only one spike; however, any thrown spike can be retrieved, regardless of who threw it, assuming the player has selected the Bio Spike as equipment. It can also be replenished with Warfighter's Resupply trait.

After throwing the spike, a number of events can happen:

The Bio Spike is popular with stealth classes as it is silent, gives no warning (unlike grenades), and even if the player misses, there is a good chance the target will not notice (unless they see the spike go straight by or they hear it ricochet).

However, it has a short effective range, as it rapidly descends towards the ground the farther it is thrown. Thus, at longer ranges it is necessary to aim above the target for it to be thrown accurately. The Bio Spike is considered one of the hardest weapons to master because it requires practice to aim at targets and throw it, usually in a quick succession and during movement.

The Bio Spike is available on all Zombies maps and can be attained by picking them up from backpacks dropped by killed zombies. They have a fast use but can be missed. It causes a good area damage but is not very reliable, since you may not have time to target and can end up hurting yourself. 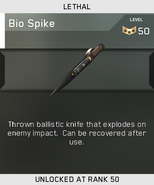 The Bio Spike being unlocked in multiplayer

The final concept for the in-game Bio Spike.

Concept for a chemical explosive knife.
Community content is available under CC-BY-SA unless otherwise noted.
Advertisement