The Bizon was originally intended to be included in Call of Duty 4: Modern Warfare, but was cut during development. Reference to this weapon can be found in the script files for Immediate Action, associated with the terrorist side. When used with Console Commands, it comes with a large magazine capacity of 64 rounds and is fully-automatic.

The Bizon appears several times in the campaign, being the most used SMG by the Federation. The weapon is also used sometimes by Keegan and Elias.

The Bizon is unlocked by default for all soldiers a player has in Create-A-Soldier, and no squad points need to be spent unlocking it.

The Bizon is an inconsistent damage, short range SMG. At any range short of ten meters, the Bizon will deal 42 damage per bullet, needing three shots to kill. Damage decreases linearly until 20.7 meters. At any range beyond 20.7 meters, the Bizon will deal seventeen damage per bullet, needing six shots to kill. The Bizon has a three shot kill range of 13.4 meters, a four shot kill range of 17.3 meters, and a five shot kill range of 19.4 meters. In Hardcore, the Bizon has a one shot kill range of roughly fourteen meters. The Bizon's range benchmarks are aided somewhat thanks to its higher initial damage, but the points at which damage drop off begins and ends are among the shortest in the SMG ctegory. The Bizon deals thirty percent more damage on a headshot. At all ranges, headshots are beneficial, but at short range or long range, multiple headshots are required to lower the amount of shots needed to kill. The Bizon has low penetration power, only able to deal decent damage through the thinnest of obstructions.

The Bizon's rate of fire is excellent. It has the third fastest rate of fire in its class, firing at 937 RPM. This high fire rate, combined with the Bizon's capability of getting a three shot kill, makes the Bizon an extremely potent weapon in CQC. Only the CBJ-MS and the Ripper in SMG mode fire faster.

The Bizon's accuracy is very poor. The iron sights are decently clean if somewhat cluttered, but the recoil per shot is poor. The Bizon has recoil values of 32 to the left and 55 to the right. The Bizon has no downwards recoil value, and will instead kick with a value of either 10 or 62 upwards. The Bizon will kick up with every shot, and will tend to drift rightwards. Coupled with its high default fire rate, the Bizon will quickly drift well off target in very short order with prolonged fire. Although the Bizon has the highest centerspeed of all SMGs at 1600, the constant upwards recoil makes the Bizon among the most inaccurate SMGs on offer, and severely hinders the Bizon in ranged combat, along with its poor range and poor ranged damage.

The Bizon's handling characteristics are poor for an SMG, but solid overall. The Bizon allows users to move at 100% of the base movement speed, strafe at eighty percent of the base movement speed, aim down the sight in 200 milliseconds, and provides good hip-fire accuracy. These solid handling characteristics make the Bizon among the best and most consistent weapons in the game at CQC. The Bizon's reload speeds are among the worst on all SMGs however. The Bizon's reload animation is three seconds long, or 3.8 seconds long if the magazine was completely empty. In either case, the user can Reload Cancel after 1.93 seconds. This reload cancel speed is tied with the MTAR-X for the second slowest reload speed for an SMG, and it will force users to be extra careful when reloading the Bizon.

The Bizon has the standard assortment of attachments on offer. The Bizon's iron sights are clean, and seeing how poorly it performs at ranged combat, an optical attachment is not a good choice for the Bizon.

The barrel attachments are all available. The Flash Suppressor will remove muzzle flash, but the Bizon is more than usable without it. The Silencer will remove muzzle flash, prevent the Bizon from making the player appear on radar, and make the gun quieter when shooting, at the expense of the range benchmarks becoming 25% shorter. The Bizon may be starved for range, but since it fires so fast, users may consider the Silencer to be a wise choice. The Muzzle Brake will improve the Bizon's range benchmarks by twenty percent, reducing the likelihood of the Bizon needing extra bullets to kill. Seeing how the Bizon's damage drops off so drastically, some may consider the Muzzle Brake to be very useful.

The only underbarrel attachment available is the Grip. The Bizon's recoil values are decently large, so the Grip will have a noticeable effect on the Bizon's accuracy. The Bizon will still always kick upwards, but the Bizon will become much more controllable for players who hold down the trigger for prolonged periods of time.

The modification attachments are available. Armor-Piercing will allow the Bizon to deal much more damage to players who are wearing Ballistic Vests or wearing Juggernaut armor. The attachment doesn't hurt to use, but its use cases are niche. Extended Mags increases the Bizon's magazine capacity to an enormous 54 rounds, and increases the starting ammo loadout to 162 rounds. Extended Mags never hurts to use, and a player should especially consider using it should they not want to use Scavenger and/or Sleight of Hand. Rapid Fire increases the Bizon's rate of fire to an enormous 1111 RPM, but it comes at the expense of accuracy, as not only will the faster fire rate render the Bizon less accurate, but the Bizon's recoil values will be made five percent larger. Rapid Fire renders the Bizon practically useless outside of medium range engagements, but it makes the Bizon all the more lethal in CQC.

Overall, the Bizon performs like a stereotypical SMG. The Bizon's combination of attributes will cause the weapon to really shine in CQC, providing quick kills and extra sustained fire capability in a slick handling weapon. However, the Bizon, like a stereotypical SMG, struggles mightily at medium range and beyond, with not much that can be done to rectify this weakness. As such, players need to play the Bizon to its strengths and avoid its weaknesses.

The Bizon is very similar to the CBJ-MS, another SMG. Both SMGs provide unmatched close quarters capability at the expense of poor reload speeds and very poor ranged combat capabilities. Compared to the CBJ-MS, the Bizon has better range, less horizontal recoil, a larger centerspeed, faster reload speeds, superior magazine capacity, a larger starting ammo loadout, and is offered for free on all of the player's soldiers in Create-a-Soldier. However, the CBJ-MS fires faster, has less vertical recoil, and comes with built in Armor-Piercing capability. Both SMGs serve a very similar function, and if a player is interested in using either of the two SMGs, they should consider using the other and seeing which of the two SMGs that they prefer.

The Bizon was buffed on the April 3rd patch, along with most other SMGs, to make it a more competitive weapon. It received an overall 35% range increase, making it more potent at medium ranges than it was pre-patch.

It was also nerfed in another patch, as its headshot multiplier was reduced to 1.3 (now, two headshots are needed for a two-shot kill), and the recoil was slightly increased.

The Bizon appears in Extinction, only on Point of Contact. It is located in the city off to the alley to the furthest left, in a pile of garbage. It can be purchased for $2000.

Compared to the other SMG in the city area, the CBJ-MS, the Bizon has more ammo, a larger magazine, faster reloads, and a slightly slower rate of fire to further prolong the magazine. The Bizon still has a ferocious rate of fire. Due to its characteristics, the Bizon is a poor fit for accuracy challenges, since it is easy to accidentally fire more shots than intended. However, the Bizon is quite inaccurate, since it kicks up with every shot. Combined with the Bizon's sharp damage drop-off and mediocre range, it is a weapon that fares extremely poorly at longer ranges.

A render of the Bizon's model

The Bizon in first-person view

Pick-up icon of the Bizon

Headshot 30 enemies with an SMG to unlock

The PP19 Bizon returns in Call of Duty: Mobile. It was added in April 2021 as part of the Season 3: Tokyo Escape update.

The PP19 Bizon returns in Call of Duty: Modern Warfare.

The PP19 Bizon is the main SMG of Barkov's Forces.

The PP19 Bizon in first person 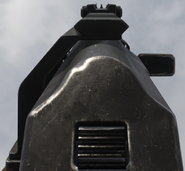 The Bizon returns in Call of Duty: Black Ops Cold War as the Bullfrog.

The Bullfrog can be brought into any map via Create-A-Class, at Loadout rarity and can be found at any rarity via the Mystery Box for 950 Essence. When upgraded via Pack-a-Punch Machine it becomes the High Anxiety, gaining increased stats. 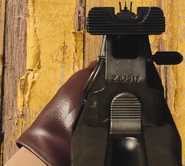