"Alongside a team of Winslow Accord Cyber Soldiers, infiltrate the NRC airfield in Ethiopia and secure the captured Egyptian Minister for extraction."
— Mission Briefing

"Black Ops" is the first (fifth in Nightmares) level in Call of Duty: Black Ops III.

At the Abu Simbel airport in an air traffic control tower, the Player, Hendricks, and three "Alpha" soldiers create the "mother of all distractions" to get inside the nearby compound to retrieve Minister Said safely. After an NRC plane's runway has been diverted, the Player uses the DEAD to shoot down the plane. The plane nearly lands before being destroyed instantly by the DEAD's directed energy laser and crashes on the runway, hitting the tower. The team, with the exception of the "Alpha" soldiers, go to the compound. After entering the security station, the Player uses the surveillance footage to locate Said. They go to the interrogation room to retrieve him.

After rescuing Said, he mentions Lieutenant Khalil, a hero of the Cairo uprising who should be rescued, though it's against orders. The team does so, and become compromised when they free Khalil. After fighting through the depot, they get into a cargo elevator and become surrounded and outnumbered, but are saved by Taylor's team. The team now moves through several hangars, right before getting to the bridge. Due to many Technicals blocking the path, everybody goes to plan B and blows up the bridge, altering their extraction zone to a new location.

The team nearly surrender to a VTOL, but it's destroyed by Taylor. After the team gets into an alleyway, they hear loud footsteps, which, it turns out, are from the nearby assault robots. The Player, Hendricks, Taylor, Said and Khalil and three Alpha soldiers get into the nearby garage to seek safety. Hendricks wants Taylor to rescue the other hostages they noticed from the security station, and Taylor agrees to have him and his team rescue them while Hendricks' team escapes via the APC.

The team escapes and fights through multiple vehicles, four VTOLs, and many Grunts before reaching the extraction zone. The team arrives, but the APC goes too fast for Hendricks to control, eventually crashing. Fortunately, everyone survives and makes it to the extraction zone. When the VTOL picks up the escape pod, everybody gets aboard except the Player, who is nearly wounded by a missed rocket. The Player doesn't catch Hendricks' hand, leaving him/her there. Then, the remaining Grunts attack the Player, tearing both hands from the wrists and breaking their right leg right before Taylor saves them (before possibly dying), and the Player goes into surgery. 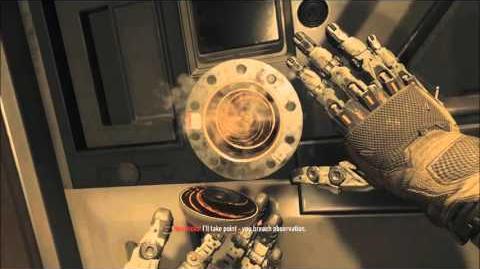