Call of Duty Wiki
Register
Don't have an account?
Sign In
Advertisement
in: Call of Duty: Black Ops 4 DLC

"The Black Ops Pass is included in the Digital Deluxe Edition, the Digital Deluxe Enhanced Edition and the Pro Edition, and represents a new approach to post-launch content for Call of Duty: Black Ops 4, including a robust live season for the community. Instead of having four separate content drops, Black Ops 4 fans will experience a more frequent cadence to keep things fresh and deliver new maps and content more regularly throughout the year."
— Description

The Black Ops Pass[1] is a downloadable content that appears in Call of Duty: Black Ops 4. It acts similar to the Season Pass from previous installments. It is included with the Digital Deluxe, Digital Deluxe Enhanced, and Pro Editions of the game. It is also purchasable in-game for $49.99 USD.

The difference between the Season Pass and Black Ops Pass is that Downloadable Content, will not be accessible unless one buys the Black Ops Pass, unlike the Season Pass, which offered each DLC Pack separately for $15.00 USD. This has, however, been contradicted by the fact that the Zombies map "Classified" was released separately for $7.99 USD on February 19th, 2019 on PS4 and February 26th on Xbox One and PC.

Content available in the Black Ops Pass as of Operation Spectre Rising.

Content available in the Black Ops Pass as of Operation Grand Heist. 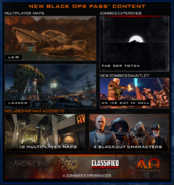 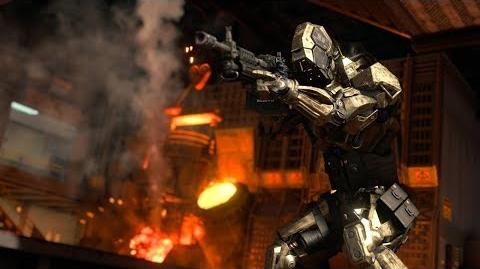