Parade
Board the transport headed for the UNSA dedication ceremony.
Under Attack
Fight your way to AATIS Control Tower and stop the SDF attack.
Take the hill and repel the SDF forces.
Breach the control room and stop the attack.
Take to the Sky
Board your Jackal.
Assist the UNSA fleet and repel the SDF attack.
Eliminate the SDF squadron.
Destroy the SDF Destroyer.
Return to the Retribution.
Engage the enemy supercarrier Olympus Mons.

Elements of Throwback, Retaliation and Renaissance

"Lt. Reyes and Lt. Salter successfully retook AATIS control tower from the SetDef operative, Riah. They then engaged the retreating SDF fleet in orbit. The enemy flagship, Olympus Mons, helmed by Admiral Salen Kotch, was repelled through the actions of Captain Alder, commander of the UNSA Retribution, at a great cost of the ship's crew."
— AA-Report

"Black Sky" is the second campaign level in Call of Duty: Infinite Warfare.

After being briefed by Raines on the failed operation on Europa, Reyes joins Salter and Ethan to patrol the Fleet Week parade. In the middle of the event, the AATIS guns turn on the UNSA's own fleet, triggering a massive SetDef invasion and crashing the group's Raven.

Reyes, Ethan, Salter and Raines fight their way through the city and eventually arrive at the AATIS control tower, where a rogue worker is attempting to commit a suicide bombing. The worker, identified as SetDef sleeper cell agent Akeel Min Riah, warns of future attacks and is taken into custody. Reyes, Ethan and Salter head to space with their remaining warship, the Retribution. The surprise arrival of the Olympus Mons forces the Retribution to ram into the ship, making the ship retreat and killing the captain in the process.

Reyes arrives on the bridge of the Retribution, where Raines informally promotes him to the rank of Captain. 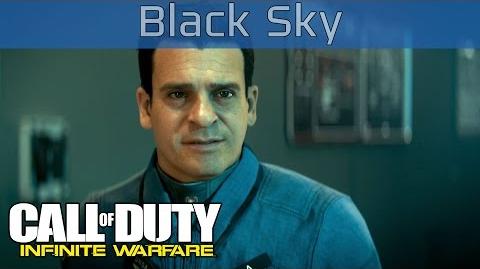