"Al-Asad's army is preparing to execute Nikolai, a former informant of ours. Sgt. Kamarov will be on the ground to assist us in a rescue mission. We take care of our friends."
— Call of Duty: Modern Warfare Remastered level description

"Blackout" is the fourth mission in Call of Duty 4: Modern Warfare and Call of Duty: Modern Warfare Remastered. Taking place the day after Khaled Al-Asad's coup in the Arabian Peninsula, this mission sees the Special Air Service team, led by Captain Price, joining forces with Russian Loyalist troops in the Caucasus Mountains to rescue a Russian informant and liberate an Ultranationalist-controlled village.

Shortly after Al-Asad makes his move and overthrows the government of President Al-Fulani, the SAS learns that Nikolai, their informant, who provided the SAS with intelligence on their previous mission aboard the Estonian freighter, has been compromised and taken prisoner by the rebel forces. Realizing that the Ultranationalists intend to execute Nikolai as a traitor, Price leads a rescue mission into the Caucasus to retrieve the informant, remarking that "We take care of our friends." Inserting near Nikolai's position, the team first silently eliminates several guard posts before meeting up with Russian Loyalist troops lead by Sergeant Kamarov.

It is clear from their discussion that Price and Kamarov, despite having fought alongside each other in the past, have very different objectives in this mission. For Price, Nikolai's survival is paramount and beyond all other considerations. Kamarov, meanwhile, hopes to free the nearby village from Ultranationalist control and eliminate the threat posed by their BM21s. Since both need the other's forces in order to be successful, a great deal of tension exists between the two men. As the Loyalist troops make their assault upon the village, MacTavish provides sniper support from the nearby ridge and eliminates a force of Ultranationalist helicopter troops flanking from the left, allowing the Loyalists to make greater gains in the village.

Eventually however, Gaz, frustrated with Kamarov's stalling, threatens Kamarov, succesfully getting Nikolai's location out of him, a house at the end of the village. Abandoning their Loyalist allies, the SAS team makes their way to the house. MacTavish and Price enter the house as Gaz cuts the power, and the team successfully secures Nikolai. With the informant secure and the village in control of the Loyalists, the team is extracted via helicopter that heads for a German safehouse.

Take out the M21 sniper rifle and go forward until there is a dock in front. Go back and snipe the soldier on it and a soldier near a truck to the back. Snipe the soldier near the truck first. When they are out, keep going forward. It is also possible to shoot these men from where the player first spawns, if the weapon is not moved.

Eventually, there will be a house on the right and an overturned boat on the left. Crawl past the boat on the left side. Once the player is out, the two men in the first house will be almost lined up. They can be taken care of in one shot so the other guards will not be alerted, but while the closest soldier can be shot anywhere with the M21 to get a kill shot, the second man requires a headshot because of the damage loss of going through the first guard. When they are eliminated, go near the next house and look for some boards sticking out from below the window. These boards will allow the player to look into the house, and well as get accurate rounds into the house without making the guards wake up due to the player being too close. This next part requires accuracy and speed. In the house there are two guards, as well as one on the deck. Take out one of the guards, preferably with a headshot (one shot kill), and then quickly put two rounds into the other guard, immediately followed by rushing to the front of the house to knife the guard there, who will probably be waking up. Go up to the next house, which will be on the right. Go inside, and Price will open the door on the left to a field that has Kamarov and his men.

After the player meets the Loyalists, take a right and go up the hill. Follow them until arriving at a ridge overlooking a very large rocket launcher. Get near the post that's between two of them, and open fire. Keep an eye out on the house to the left. Two LMG troops will start firing from it soon, so get ready to take them out. For the one on the left, the player has to shoot the wall near him to get him. This is one of the few times in the game when the mil-dots on the sniper scope can be used, as both machine gunners' heads are 1 up, and 3 left of the machine gun's muzzle, and a headshot is the only way to kill the gunner through the wall in one shot. If one desires to save ammunition, though, they can run backwards and up a small slope to the left of where they came from. Turn around and a small opening of the shrubbed fence will provide a clear view of both hostile machine gunners.

After a while, the player will be told to move forward. Do so, until at the bottom of a hill with a power station at the top. Troops will pour in from the top, so hide behind some debris and begin sniping them. Some may not pop their heads out, in this instance the player should use the Grenade Launcher and flush them out. When they are dead, do not advance yet; another wave will come from the station.

When both waves are down, go right along with the team and start sniping enemy troops along the side of the house right in front of the troops in the attic of a house that's right below the player. The BMP that comes up the road can be taken out with one shot from the M203 Grenade Launcher if the player is fast enough. If one eliminates the troops in the house right below the cliff, Sgt. Kamarov will order the player's team to follow him to the power station. Once there, take a right when in it. After a cutscene, the user will be told to rappel down. Find the glowing rope and press the use key or button.

Once the player makes it down, take a right and go into the house on the right. The player could go through the field and enter a house on the other side, but that's way too dangerous. When one can see the end of the house, troops will come in from the end. The player can either stun them with a flashbang or blow them up with the grenade launcher. When they are dead, go into the next house. Try to run though this house; the troops in the field will notice the user here and will attack. At the end, a troop will usually come in. Eliminate this threat.

After getting out of the second house, go forward and one will see a medium-sized house on a hill. Get to the right until seeing a door, turn on the night vision and wait for Price to open the door.

At the end of the stairs, turn left and there will be a soldier huddled in a corner. Take him out, then turn left. There's a Russian hiding behind a sofa, so spray the sofa with bullets, this should kill the target. Get to the sofa and turn left. There's an Ultranationalist hiding behind a door that occasionally peeks in and takes a few shots. Fire at the door until his body falls. Get near the door and turn right. There, the player will see Nikolai, but there's a soldier hiding behind the right wall. Either spray the right wall with bullets or throw a flashbang in, then go in and run up to Nikolai.

After that, get out of the house the extraction chopper will be on top of the hill. When the allies get close to it, press "use" near it and exit the level.

Nikolai with an AK-47

The house on the left

Going up the hill

Overview of the sniping area

Clearing the house Nikolai is held in (Modern Warfare Remastered)

Nikolai talking to Price in the helicopter (Modern Warfare Remastered) 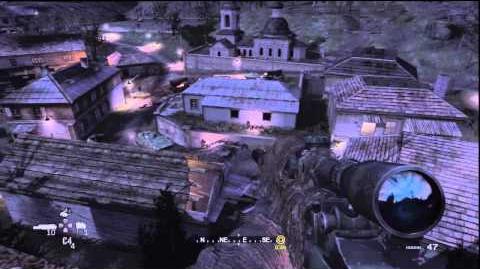 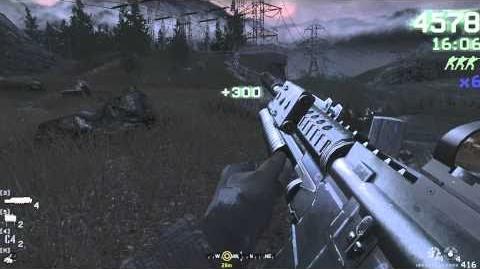 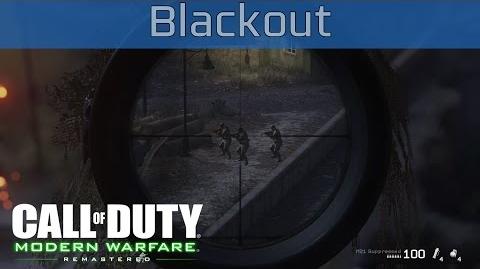