The Blade of Barbarossa is a piece of Frederick Barbarossa's Sword that appears in Call of Duty: WWII Nazi Zombies. It was recovered by the MFAA team while they were surviving in Berlin, Nazi Germany after escaping from Heligoland.

The blade has two functions of use. The first function is as a standard melee weapon, acting as the superior melee weapon in the map in terms of sheer strength and damage. The other function occurs when the player presses the "aim down sights" button whilst holding out the blade, which will send out a circular arc of energy, knocking down and killing zombies.

The Blade of Barbarossa in first person.

Drostan Hynd killing a zombie with the blade. 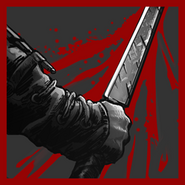 The Ammo Conservation achievement icon displaying the Blade of Barbarossa.

Retrieved from "https://callofduty.fandom.com/wiki/Blade_of_Barbarossa?oldid=2450262"
Community content is available under CC-BY-SA unless otherwise noted.