Destroy 40 enemy killstreaks rewards using blind eye
In Call of Duty: Modern Warfare 3, Blind Eye grants immunity to air support and sentry turrets, recon drones as well as assault robots. This means that a player will not be actively shot at and pursued by autonomous air support like the Attack Helicopter. This perk also causes the user to lack a "glow", nor are they highlighted by a red box, in the thermal vision of player-controlled items such as Predator Missiles or Remote Sentries. It's important to note, however, one can still be punished by such killstreaks as a result of collateral damage intended for a player without Blind Eye.

The Pro version is unlocked by destroying 40 air support items of any type, including sentry guns. Blind Eye Pro shortens launcher lock on time by half and also increases the damage that the user's bullets do to air support by 60%. As an important note, the AC-130 is immune to bullets and can only be shot down by launchers, Blind Eye Pro does not affect the Javelin's ground lock ability, and SAM Turret vehicle kills do not count towards achieving Blind Eye pro, mainly because they can't kill any players.

Because Blind Eye at its essence provides stealth against aggressive killstreaks, it is best suited for perks that can capitalize on either a stealth role or an anti-killstreak role. For a stealth class, Assassin and Dead Silence provide the most stealth that any perk combination can offer, saving players from being detected by everything except direct lines of sight and unsuppressed weapon fire. While head on engagements may not be best suited for classes with Blind Eye, the stealth given by Blind Eye and the aforementioned perks give players the opportunity to flank enemy positions and remove groups of enemies without detection and direct confrontation.

If players choose to highlight Blind Eye for an anti-killstreak role, Hardline can aid in quickly turning the tide in battle. Since destroying air support grants players killstreak points, using Blind Eye gives players the opportunity to down enemy aircraft that will count towards your killstreak bonuses, allowing the player to turn an enemy's killstreak into one that will aid you or your team at an expedited rate. Additionally, Overkill is a strong accent to Blind Eye, as you can pair an LMG with a more agile weapon to have a strong continuum of force against both killstreaks and players. SitRep (particularly the Pro ability) is a particularly good perk with a class devoted to destroying killstreaks since the moment during which you wait for a launcher to lock or the time in which it takes to gun down a killstreak leaves players vulnerable to enemy attack. With SitRep Pro, louder enemy footsteps allow players a chance of hearing and reacting to an immediate threat instead of being taken by surprise by a lurking opponent.

Blind Eye returns in Call of Duty: Black Ops II, however, the things it protects players from has been significantly reduced. AI controlled helicopters will not target the player with its weapons, but beware, as the Warthog's unguided rockets can still find its way to kill the player. As well, Hunter Killer Drones and Swarms will not target players at all, but other players that are targeted can unwillingly kill the player if they are nearby.

It is a very situational perk, as next to all of those scorestreaks are very hard to achieve under normal circumstances, and nearly all of them have a way of still hitting the player, the most common is splash damage if another nearby player is targeted.

The following scorestreaks do not detect Blind Eye users:

2
Blind Eye returns in Call of Duty: Ghosts as a stealth perk. When used, players are undetectable by air support, Oracle systems, and sentries. As well, the player will be protected from the Death Mariachi's Oracle abilities.

Blind Eye makes a return in Call of Duty Online

It is a Tier 2 perk unlocked at Level 14. Similar to counterparts of other Call of Duty titles, it allowing the player to be undetectable by UAVs, Sentry Guns and Air Support.

"Undetectable by tracking drones, explosive drones and all Scorestreaks except the UAV."
— In-game description.

Blind Eye appears once again in Call of Duty: Advanced Warfare. Just like in the previous installment , it will prevent the player from being highlighted while being targeted from a Warbird or Paladin, and makes all A.I. targeting scorestreaks not notice the player. The perk also makes it so that the player's name is not shown when they are targeted on the ground, and the enemies cross-hairs also don't change to red.

Blind Eye returns as a tier one perk in Call of Duty: Black Ops III, allowing enemy aircraft to ignore the user. 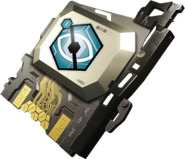