"Take down Makarov at the Hotel Lustig."
— Level description

"Blood Brothers" is the fourteenth mission of Call of Duty: Modern Warfare 3.

This level sees the death of the series main character, John "Soap" MacTavish, as well as the death of supporting character Kamarov, and starts the chain of events that propels Yuri and Captain Price in the final act of the campaign and reveals Yuri and Makarov's backstory from Zakhaev's failed assassination up to the beginning of "No Russian" in Call of Duty: Modern Warfare 2.

It also reveals how Imran Zakhaev survived his assassination in "One Shot, One Kill".

The mission starts off with Soap and Yuri on top of a church tower waiting for Makarov's convoy so they can assassinate him. Captain Price and Kamarov are also attempting to ambush Makarov inside the main building. After Soap and Yuri killed the guards on the balcony, Price rappels into the building and finds Kamarov strapped on a seat with C4. However, Makarov, aware about the way which Price and MacMillan attempted to assassinate Zakhaev prepared for them earlier. He spoke on the radio saying, "Captain Price, Hell awaits you" ("Captain Price. Ад ждет тебя") and detonates the explosives strapped to Kamarov, killing him and nearly taking Price with him. After watching Price and Kamarov in the building across the street, Makarov says, "Yuri, my friend. You never should have come here."

When the explosives that were hidden in the building where Soap and Yuri were situated detonate, Soap pushes Yuri out of a window right before the building explodes (Soap manages to jump, but gets caught within the blast radius) and Yuri and Soap fell down onto the ground. Soap is hit by a pile of falling debris which opened his previously patched up stab wound up, causing him to bleed out. Price came to help Yuri and Soap. Price helps Soap and the three ran across the town plaza, but Soap stumbles. Yuri grabs him and resumes escaping from the large enemy force firing at them. Turning a corner, Price spots an enemy helicopter and the three quickly got off the road as Price blows a hole in a nearby building and they escaped inside. Yuri setted Soap down next to a skip where Price picks him up and hands Yuri his M4A1. Yuri protects Soap and Price as they moved through a shop, eventually arriving in a small courtyard.

Taking cover behind a statue, Price decides that it is not safe there and the three moved into an office. Emerging out of the office, Yuri engages more hostiles in the street and as the enemy forces started to converge on their position, they ran into a nearby shop. Yuri covers the other two as they ran through a basketball court. As the enemies started to close in on the three, the Czech Resistance fighters emerged from a building behind Yuri. As they fended the hostiles off, Soap is moved inside and placed on a table. Though Price and Yuri desperately attempted to stop Soap's bleeding, their efforts are in vain. Soap tells Price that Makarov knows Yuri and with that, he succumbs to his wounds. After Soap's death, Price takes Soap's dog-tags and field journal, pulled his M1911 out (The same pistol that Price slid to Soap to kill Zakhaev which was given back to Price after he was rescued from the Russian gulag) and lays it on Soap's chest saying, "I'm sorry." A few seconds later, the hostiles attacked the Resistance. Price and Yuri escaped and they reached a door which Price told Yuri to open. When he opens it, a stairway is revealed. Price, furious over his friend's death, punches Yuri down the flight of stairs and holds him at gunpoint, demanding how he knows Makarov which prompts a series of flashbacks.

"I was a soldier of Russia, not a taker of innocent lives. But in his eyes, this marked me as the enemy. "
— Yuri

Yuri and Makarov as it transpired are both present at Price and MacMillan's attempted assassination on Imran Zakhaev in Pripyat. Makarov and Yuri are in the car with Makarov in the driver's seat and Yuri in the backseat. Makarov explained the reason of the deal that they are making to Yuri. Imran Zakhaev was shot by Price in the left arm and quickly got in the car. Makarov quickly drove, running over several of their own men in the process. He was seen with Vladimir Makarov when Makarov ordered Khaled Al-Asad to detonate the nuclear bomb that killed the 30,000 U.S. Marines including Sgt. Paul Jackson while standing at the safe distance as they witnessed the explosion. In another flashback, he attempted to stop Makarov from killing the civilians in Zakhaev International Airport. It was revealed that Yuri tried to leak the information that could prove detrimental to Makarov, but failed. Yuri was shot in the abdomen and left for dead. Makarov, aware about the presence of Joseph Allen killed the American after the mission. Yuri managed to get into the elevator that led up to the airport lobby shortly after Makarov's team opened fire at the civilians and attempted to kill Makarov with a guard's P99, but blacked out and the paramedics found him. After surviving Makarov's betrayal, a new burning hatred for the man was instilled in Yuri. When the flashbacks ceased, he explained to Price that he was "a soldier of Russia, not a taker of innocent lives." Price told Yuri that he bought himself some time for the time being. 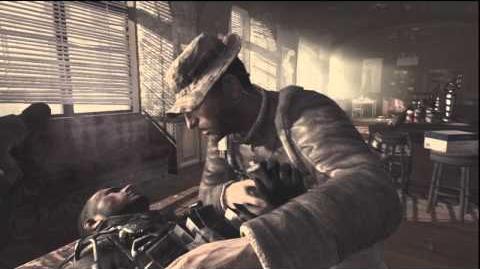 34. After entering a store through the back, find the intel lying on the ground of the store. This is right after Price picks up Soap. 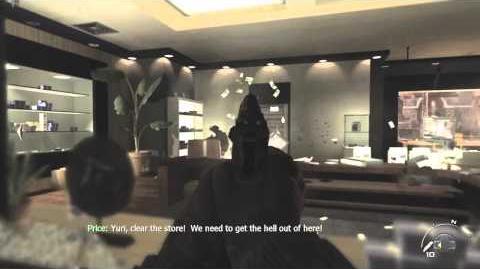 The Church, blowing up.

Price rappelling from his vantage point, as seen in the "Redemption" trailer. Note that he is wearing his uniform from Call of Duty: Modern Warfare 2.

The Hotel, blowing up.

Yuri and Soap fall through the scaffolding and into the street below.

Yuri's flashback of the moment at One Shot, One Kill where Price blew Imran Zakhaev's arm off. Notice how he has a 2016 Russian Uniform.

Zakhaev negotiating with the rebels.

Zakhaev getting his arm blown off.

Yuri's flashback from the nuclear detonation going off in Call of Duty 4: Modern Warfare.

The RSASS shown after the explosion.