"Quickly inflicting a lot of damage spawns a Wolf companion that fights alongside the player."
— Description

Blood Wolf Bite is a Perk featured in Call of Duty: Black Ops 4 Zombies. It was added alongside the release of the map Alpha Omega with Patch 1.20.

It appears as a Perk Vapor within Voyage of Despair, IX, Dead of the Night, and Ancient Evil, and as a traditional Perk-a-Cola within Blood of the Dead, Classified, Alpha Omega, and Tag Der Toten.

Once bought, should the player manage to inflict a decent amount of damage within a small timeframe, a friendly Dire Wolf, named Luna, will spawn, signified by a whistling sound. Luna will follow the player with the perk and attack any nearby enemies. Luna will stay for about 45 seconds before despawning, signified by a howling sound. Afterwards, the perk needs to recharge for about 5 minutes before Luna can be spawned again.

When Blood Wolf Bite is set as the "Modifier" perk and the player has all of their other perks, whenever Luna kills an enemy, there is a chance it may drop one of three types of power-ups:

The power-ups can only be picked up by the player with the perk, and it only affects them. 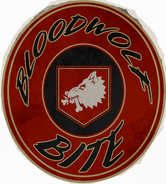 Blood Wolf Bite statue in use.
Community content is available under CC-BY-SA unless otherwise noted.
Advertisement