"We have lost many brave men, but their sacrifice is not in vain. Our tanks now form a line of steel so powerful that all German resistance will be crushed beneath its mighty treads. Today, we will watch as Seelow falls, along with all those foolish enough to stand in our way."
— Sgt. Reznov in the pre-mission screen.

"Blood and Iron" is the eighth mission in Call of Duty: World at War's single-player campaign. In this level, the Russians are ready to break through Seelow and march on to Berlin. Dimitri Petrenko takes control of a Russian OT-34-85 tank, the player starts out with Commissar talking to the player and the other Russian tanks, while Reznov guides the player on how to control the tank throughout the level. Start by destroying artillery cannons and German infantry armed with Panzerschrecks and small arms. The OT-34-85 is equipped with a coaxial flamethrower with a large radius of fire activated with the same button as the Grenade button, (When playing Co-Op, whoever is not the host controlls a T-34-85 with a Coaxial Machine Gun instead), after destroying the Artillery positions and some Panzers, move on to destroy a radio tower. Dealing with enemy tanks, Panzers and King Tiger positions, move up to destroy the radio tower, preventing the Germans calling for reinforcements. Take care after destroying the tower though, the next area will be sprawling with tanks, Panzerschreck towers, bunkers and Germans with Panzerschrecks. Eventually the player will reach the train station, and the mission will end. During a short cutscene, Sgt. Reznov will compliment the player, and tells the other soldiers of his/her heroism. 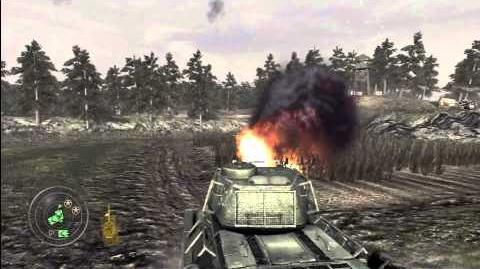 Petrenko's OT-34.
Add a photo to this gallery

) - Complete Blood and Iron on Veteran.

) - Destroy all the towers and bunkers in Blood and Iron. (Solo or co-op)

Retrieved from "https://callofduty.fandom.com/wiki/Blood_and_Iron?oldid=2443974"
Community content is available under CC-BY-SA unless otherwise noted.