The Bloodhound is a revolver appearing in Call of Duty: Black Ops III in the Zombies map Shadows of Evil. It appears as the starting handgun in the map, being the first starting pistol that has different stats than the M1911 (With the Mauser C96 only being a re-skin). It is significantly stronger than the other starting pistols, and has a much higher fire-rate. On round 1, it can kill zombies in just 3 body shoots, opposed to 7 its predecessors requires.

The Bloodhound does however have a slower reload time, being a revolver. The higher damage makes it better at killing Zombies as rounds pass, however it becomes inferior to its predecessors at obtaining points from hits.

The Bloundhound can also be obtained by opening a Harvest Pod, typically green ones as it is considered a bad reward. However, it can become a favorable reward if one seeks to use its Pack-a-Punched variant.

It should be noted that the grenades shot by this weapon have a high splash radius and damage against the player, downing a player without Juggernog in two hits. Along with the close quarters layout of Shadows Of Evil, the Meat Wagon may be detrimental to one's survival. Shadows of Evil lacks the perk PHD Flopper that would combat the self-damage inflicted from the weapon, however the normal Gobblegum "Danger Closest" achieves the same affect, only for 3 rounds per gum. 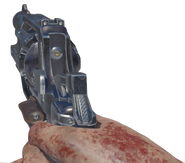 The Bloodhound in first person 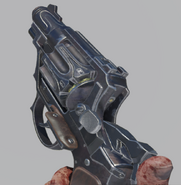 Picking the Bloodhound up

The Bloodhound in the Shadows of Evil trailer