For the achievement with the same name, see Achievements/Call of Duty: World at War.

"That our objective? It's a damn fortress!"
— Pvt. Polonsky

"Blowtorch & Corkscrew" is the twelfth campaign mission in Call of Duty: World at War.

This is the first of two missions to take place on Okinawa, meaning the squad is not on Peleliu anymore. The player will start off with the Browning M1919 out, but take the flamethrower out, as it will be needed shortly. After advancing a bit, some Japanese soldiers will pop out of some pits and Roebuck will order Miller to burn the grass. It is recommended that the player throw a smoke grenade on the trail on the right of the first hill.

It is also advised that before encountering the first bunker, throw a smoke grenade or two, then hide in the smoke and use the flamethrower to destroy anyone around.

After clearing it out, advance to an area where there is a small bunker that is one of the three that must be destroyed and throw a Satchel charge and detonate it. Save the last smoke grenade for the last bunker with the two MG's. There should be a nearby sack to replenish the satchel supply for the next few bunkers. After some more firefights the second bunker will be reached, follow the same process as before.

The third bunker is nearby and is at the top of a steep hill and is destroyed in the same way. Finally, the large, final bunker is reached and the squad will need to fight through a series of narrow Japanese caves before eventually clearing the bunker itself and climbing above it to victory. 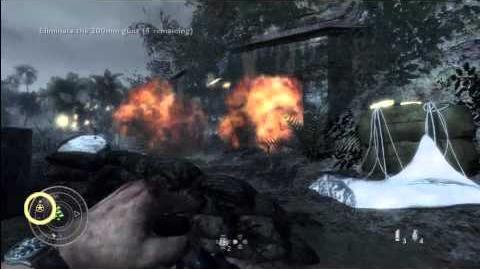 Call of Duty World at War - Campaign - Blowtorch and Corkscrew

Walking in a bunker.

Going towards a bunker.

Walking in a bunker.

) - Obtained by beating the mission "Blowtorch & Corkscrew" on Veteran difficulty.