When Pack-a-Punched via the Pack-a-Punch Machine, it becomes The Sweeper, with a two-round magazine and 120 in reserve. The Sweeper is very powerful, being able to kill zombies with one hit until Round 40 if one has Double Tap and aims for the head.

Double Tap Root Beer is a very effective perk for the Blundergat as well as The Sweeper, as it doubles the amount of pellets shot and thus potential damage as well. Speed Cola is recommended as well due to the frequent and somewhat lengthy reloads. Electric Cherry can be very useful when using the Blundergat, as the player is left very vulnerable during the constant reloads, and the effect of the perk is usually maximized (as the shock effect is higher the emptier the magazine is) due to the low ammo before reloads. Juggernog is also useful as the Blundergat is most effective up close where the player is bound to take more attacks from zombies.

In addition to Mystery Box, the Blundergat can be obtained after collecting five hidden blue skulls around the map by throwing the Hell's Retriever at them. These skulls can only be seen in Afterlife, although their locations always stay the same each game.

0 (Upgraded via Acid Gat Kit from Blundergat at no cost)

blundersplat (Acid Gat & Vitriolic Withering)
When upgraded with the Acid Gat Kit, it becomes the Acidgat. It has a three-round magazine and fires in bursts of three rounds. The projectiles stick to walls and other objects (including zombies), and will explode soon after. When shot, the projectiles will typically spread in a very wide angle instead of going where the player aims. These rounds are also capable of hurting the player, although the explosion is somewhat minor and should not considerably damage the player unless already severely hurt. When a zombie is hit by a projectile, they will stand in place until it explodes.

Due to the self-inflicted damage, Juggernog is useful to minimize the chance of downing oneself or do enough damage for a single attack to down the player. Double Tap Root Beer is questionable, as it only helps in firing the three projectiles within the burst faster without increasing damage. As with the regular Blundergat, Speed Cola helps with the constant and long reloads, and Electric Cherry also helps to protect the player during these reloads.

In Blood of the Dead, a new upgraded version of the Blundergat titled the Magmagat makes its debut. This version shoots a blob of molten lava that can stick to surfaces and attract zombies, killing them after making contact with the blob.

When the Magmagat is upgraded in the Pack-a-Punch Machine, it becomes the Magmus Operandi. This gives the weapon an additional shot in the barrel, as well as increase the damage caused by the blob, which can instantly kill Brutus should he walk over it.

Blundergat in Blood of the Dead

Acidgat projectile in Blood of the Dead.

The blob shot by a Magmagat.

The Magmagat's effect on zombies

Magnus Operandi in Blood of the Dead. 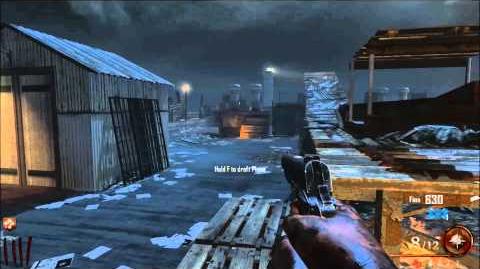 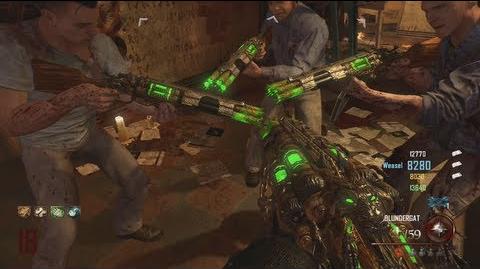 Most Wonder Weapons Ever Gameplay! Mob of the Dead Black Ops 2 Zombies
Gameplay with the Acid Gat and Blundergat.