Body Armor appears in Multiplayer as an equippable gear that reduces damage from bullets at the cost of a slower movement speed. Once the armor is destroyed, the player will regain their normal movement speed however the armor will be gone until the player respawns. Notably, it is the only gear with negative affects for the user, and the only gear that can be destroyed. Guns with FMJ destroy armors faster, killing an armored player also gives extra points to the killer.

Within a round of Blackout, Armor can be scavenged from around the map ranging from Level 1 to 3. Higher the level, the stronger the armor is. Higher levels of armor can be identified easier due to being distinctively more bulky. Much like the Mutliplayer counterpart, Armor has finite health and will be destroyed if enough damage is taken. Damaged armor can be repaired by utilising Armor Plating on it to patch it. 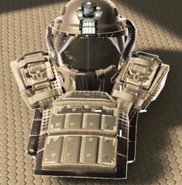 Level 3 Armor as seen in Blackout.
Add a photo to this gallery

Within Zombies, temporary Armor can be obtained whenever a player activates their Special Weapon, which will instantly grant two pips of armor that will negate 50 damage worth of health loss. The Hammer of Valhalla will also grant a pip of armor on a successful swing at Level 1.

The Perk-a-Cola/Perk Altar Stone Cold Stronghold will also grant armor if the player "stands their ground" by remaining still in a circle for temporary amount of time.

Body Armor returns in Call of Duty: Black Ops Cold War as Armor. It shares more similarities to the Blackout than the Zombies from Call of Duty: Black Ops 4. Armor can be rarely dropped from Zombies and will always be at Level 1. Armor can also be crafted at the Arsenal, costing 500 Salvage for Level 1, 1,000 to upgrade to Level 2 and 250 High-End Salvage to upgrade to Level 3.

Armor takes damage whenever the player is damaged by a Zombie and will negate a portion of the damage at the cost of it's own health. When armor is destroyed, it will play an audible sound cue and the damage reduction will be negated. Armor can be fully repaired at the Arsenal for 250 Salvage, regardless of level, partially by Armor Shards or fully repaired by a Carpenter Power-Up. Picking up a body armor pickup that zombie drops will also fully refill your armor meter if its depleted, regardless of your current armor level. 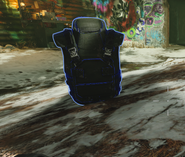 Armor in Call of Duty: Black Ops Cold War Zombies
Add a photo to this gallery

Retrieved from "https://callofduty.fandom.com/wiki/Body_Armor_(gear)?oldid=2561492"
Community content is available under CC-BY-SA unless otherwise noted.