Bogdan Sokolov (Богдан Соколов) was a Russian political official under President Boris Vorshevsky and member of the Ultranationalists in Call of Duty: Modern Warfare 3.

He was a close adviser to President Vorshevsky, meeting with him on the flight to Hamburg to negotiate peace with NATO. He greets Vorshevsky when he enters the meeting room aboard the flight and is present when the Inner Circle begins to their hijacking of the plane. When they secured the cockpit and began to try and force the plane to crash land, Bogdan hit and injured his head on the conference table and was in a stunned daze when the room was quickly breached by the terrorists. In the exchange of shots Bogdan was killed, though he appears to have been killed by the shrapnel caused by the door breach as opposed to having been shot. 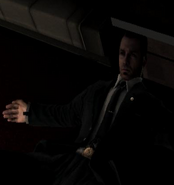