The Bombardment is a 850 point scorestreak (3500 with Persistence) featured in Call of Duty: Infinite Warfare. It is unlocked at level 19.

In Call of Duty: Siege, it appears as a Unit card available from Supply Drops and the shop for Platinum.

Bombardment is an aerial missile attack scorestreak similar to the Mortar Team and Artillery killstreaks of previous games. When used, the player designated three spots on the map to be bombarded with missiles. The locations the player have chosen then present red annulus rings coupled with gigantic red lasers that originates from the chosen location to warn nearby players that the area is about to be bombarded with missiles.

Bombardment is useful for area denial capabilities, such as completely walling off a team from an objective or area. 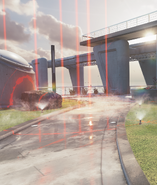 The rings and lasers of a designated position about to be bombarded. 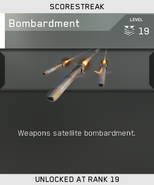 Bombardment being unlocked in multipayer.
Community content is available under CC-BY-SA unless otherwise noted.
Advertisement