For other uses, see Boot Camp.

It is a Team Deathmatch game designed for lower-levelled players in mind, to get them acquainted with Multiplayer. After the player passes level eight, the player may not enter this gametype and is greyed out on the playlist selection. Going over the locked playlist gives the message "Locked at Corporal II (Lv8)".

When Call of Duty: World at War was released, there was a relatively simple glitch allowing players above level 8 into boot camp. If a player can click through the menus quick enough, they can get into boot camp before the game registers that the player's level is too high. This results in higher players, with more experience and better weapons and perks getting many kills and few deaths. This glitch was then patched, players can still get into the lobby, but as soon as the player spawns in the game they will be kicked. However, the glitch can still be done, due to the fact the host player cannot be kicked. If a player is patient enough and waits for players to join his/her lobby, the player will be host resulting in playing in boot camp and not getting kicked.

Bootcamp is a mode in Combat Training in Call of Duty: Black Ops II. It covers levels 1-10 that puts two teams of three humans and three bots, against each other. However the bots merely fill in slots and can be replaced with human players making the bots less common in a match. All XP earned is half of the original value and challenges cannot be completed in this game mode. Also, stats will not count toward the Combat Record. 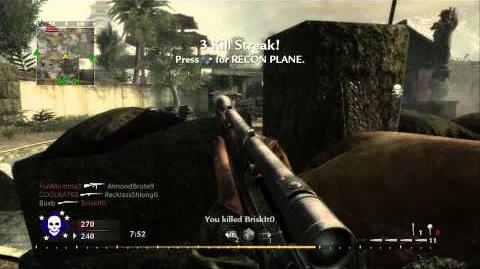 WaW-Boot Camp-Sniper Gameplay On Courtyard
Gameplay in Call of Duty: World at War. Retrieved from "https://callofduty.fandom.com/wiki/Boot_Camp_(Game_Mode)?oldid=2221771"
Community content is available under CC-BY-SA unless otherwise noted.