Call of Duty Wiki
Register
Don't have an account?
Sign In
in: Call of Duty: World at War (Nintendo DS) Single Player Levels

For other uses, see Boot Camp.

"Boot Camp" is the first level of Call of Duty: World at War (Nintendo DS).

Heavily outnumbered, US Land and Sea Forces move into the Pacific in an attempt to contain the expansion of the Japanese War Machine. Back home, boot camps turn a constant stream of recruits into battle-ready warriors that will be used to reinforce the front lines. Step up and become skilled in the tools of war.

This level puts the player in control of Pvt. Rook of the USMC. This mission will teach the player everything they need to know about the game mechanics and controls.

First, the player is taught how to move by Sgt. Lee. To complete the first step, the player must sprint all the way to the end of the room. The compass will also be indirectly introduced.

The player's next destination is the firing range, where Sgt. Dyke will instruct the player in marksmanship. The player will engage various static targets using a Thompson SMG, a M1 Garand, a Springfield Sniper Rifle, a M1911, a 50. Cal Machine Gun and Grenades. Ammunition Resupply crates are also introduced to the player.

After moving to a set of nearby stairs, the mission will end after a brief talk from the Sgt. Purcell on the mortar range to several recruits, the player included, who have just finished their training.

The beginning of "Boot Camp". 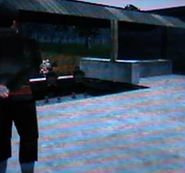 The end, where Sgt. Purcell gives his speech to the recruits.