They appear in both Multiplayer custom matches and Zombies matches in Black Ops 4.

In Black Ops, Bots first appeared in this game in a combat training lobby. They can be activated by going to the edit game options section and changing the number of friendly and hostile bots. In Recruit and Regular difficulty, Bots use weak tactics and never check what's behind them, but will aim for the head. In Hardened and Veteran mode, bots use all of their tactics and focus and checks who is behind them, and they can usually hear enemies' steps. Bots can use all kind of weapons and equipment, as well as even use the reviving ability included with Second Chance, but they won't equip one more attachment on their primary weapon when they are using warlord. The bots have their clan tag set to [3arc], which is the clan tag used exclusively by Treyarch members.

The player can play the following game modes with bots: 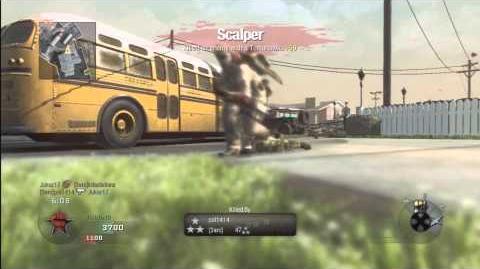 Bots are back in Black Ops II and are smarter than they were on Black Ops. In Black Ops II bots are smarter and are now able to capture objectives. They not only appear in offline multiplayer, they also appear online on Combat Training on both Boot camp and Objective. If a player leaves a combat training lobby early, a bot will replace the player's role. When a new player is joining a session, one of the bots will leave and give room to the new player. They also have their clan set to [3arc], just like before.

Players can add bots in custom games now. 9 bots can be put into a team that has no human player.

Bots randomly choose what they use in combat, as they can use everything but the Peacekeeper. Everything works well in their hands and can be a deadly threat. They can easily shoot down some scorestreaks like UAV, Counter UAV and Stealth Chopper with rocket launchers. Also they will hip fire their weapons when an enemy is close enough to them.

Bots can customize their weapons with non-DLC camouflages and reticles, they also can use non-DLC calling cards.

The player can play the following game modes with bots:

There are a handful of gamemodes online where the player can play with bots: 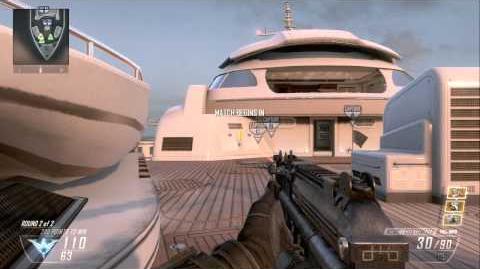 In Ghosts bots are now much smarter and they will play like a normal human player would in a Call of Duty game, using different tactics similar to actual players. They have the same four difficulties the bots have in Black Ops II but a new one called Mixed that randomly picks each bot a different difficulty. The player can now choose a bot difficulty for each bot team. The bots can also be noted to have a level based on their difficulty, i.e. a Recruit bot will be about level 1 - 10 and a Veteran one will be level 60. Whenever an air killstreak is active (helicopter, helo scout, etc). the bot will shoot at the helicopter in an attempt to destroy it. Bots are also able to use all killstreaks, including map-exclusive killstreaks. Before they use a killstreak that leaves them vulnerable, they will find a safe spot and either crouch or prone whilst they use the killstreak.

Bots are supported in all game modes, and they don't have a clan tag. 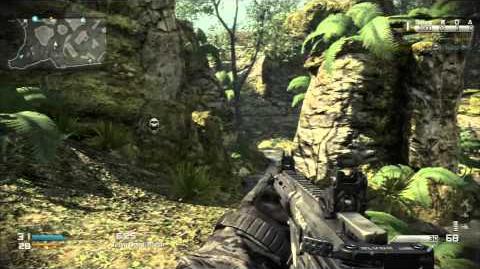 Bots also appear in Advanced Warfare. They can appear with Supply Drop weapon variants, such as the Heavy Shield - Disruptor (Enlisted), the MK14 - Obituary (Professional), the AK-12 - R.I.P. (Elite), and the ASM1 - Magnitude (Marksman). Of course, they will have a small chance of using Retired weapon variants. They can also use all perks, equipment, scorestreaks, and even Exo movements. Like they were in Ghosts, they are supported in all game modes with only one party game mode Infected. The Mixed difficulty also returns. However, in Advanced Warfare, bots are now smart enough to pick up weapons on the ground, such as if they are only armed with a Combat Knife. Regular bots use Exo Abilities more than recruit bots, and hardened bots utilize dropshotting often. 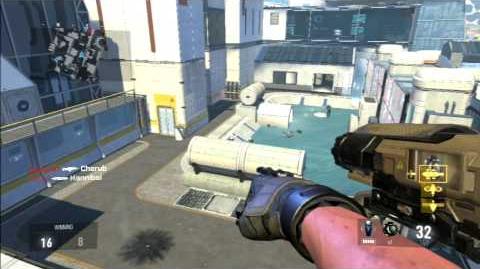 Bots have 4 difficulties: Recruit, Regular, Hardened, and Veteran. The difficulties seems to control each bot's aggressiveness, weapons and speed. For example, Recruit bots are not aggressive, and their weapons are usually weak and don't cause a lot of damage and they won't run for a long period. Veteran bots are extremely aggressive, and the weapons they choose are more likely to have high damage and fire rate and they will run, and boost jump a lot. The bots can wall run, slide, boost jump, use specialists abilities, and swim.

Unlike bots in previous games, bots in Black Ops III don't have perks and attachments in their own loadouts unless they choose the default loadouts. Also they can't react to scorestreaks that called in by the enemy team, this means they are defenseless against scorestreaks, although they still can use theirs. In Black Ops III, bots only use fully automatic scorestreaks that don't need to be manually controlled or deployed.

However, their ability of using guns is enhanced, being more accurate and faster than before. Also they can use specialists weapons to increase their firepower. Bots are still deadly if a player underestimates them.

Bots can customize the specialists' appearance but they can't customize their weapons. All bots use the same emblem and calling card, and their showcase weapon is the default KN-44 without any attachment.

Bots return in Private Matches of Modern Warfare Remastered, featuring the standard four difficulties (Recruit, Regular, Hardened and Veteran) as well as the Mixed difficulty. All game modes are possible with the bots, and they will complete the objectives as normal. They also feature abilities for area denial, usage of equipment, holding long sight lines with Sniper Rifles and reacting to Silenced and unsilenced shots. Bots also defend objectives, as well as react to objectives being captured. Also, they'll try to shoot down a helicopter using their gun if they don't possess an RPG.

While playing, bots' loadouts are determined by their difficulty level, with Veteran allowing bots to use every perk and weapon available. Bots use only 5 camouflages as well as the default (none), Desert, Woodland, Digital, Blue Tiger and Red Tiger. Bots can use Grenade Launcher attachments, the RPG-7, Frag Grenades, Claymores and C4. Their loadouts can be forcefully chosen using the inbuilt class restriction system, allowing the player to set bots to use Supply Drop items and camouflages other than the default five. Bots will also occasionally choose the default class, allowing the player to set the default classes to a specific loadout they wish to see a bot use if they choose the class. Bot names are random first names without any clan tag.

Bots will always use the default combat knife for melee attack, even there is a melee weapon in their loadout. When an enemy is close enough to them, they will switch to pistols or fire from the hip. Bots also possess a unique ability to put Camouflages on the Commander Desert Eagle, the weapon that can't be customized.

Bots return in Black Ops 4. This time players have to add bots one by one in custom match.

For the first time ever, Black Ops 4 has added the ability to add bots to play with in zombies offline and private matches. Players have the ability to add up anywhere from 1-3 bots during an in game session. bots will start off by using their starting weapons. They will also purchase weapons off the wall and rarely use the mystery box. If they are attacked by zombies in close encounters, they will knife the zombies. The player can also make them take mystery box weapons and pack a punched weapons. They also collect powerups like Max ammo and Bonus points but seem to actively avoid Nukes. They will also revive the player if they are downed by a Zombie. Bots will also purchase perks but will not seek out the perks and will only purchase them when nearby. Bots will always stay near the player though they will not use fast travel utilities.

But this time bots can't use killstreaks, call in nukes or use field upgrades. Something might goes wrong and needs to be fixed.

Retrieved from "https://callofduty.fandom.com/wiki/Bots?oldid=2502436"
Community content is available under CC-BY-SA unless otherwise noted.