Brain Rot has a chance to be applied to an upgraded weapon when placed in the Pack-A-Punch Machine again. Accessing an Alternate Ammo-Type costs 2,500 points initially, which will give a random AAT alongside a damage boost, this can be done 4 times before the cost is lowered to 1,500 and will only re-roll the ammo-type.

Brain Rot ammo has a chance to infect an enemy zombie and have them become the player's ally for about 10 seconds. When affected with Brain Rot, a zombie will display the words "Brain Rot" above its head and furiously hunt down regular zombies, instantly killing them. Even Zombie Tigers can become infected by Brain Rot, which can take down Marauders and Destroyers with a single lunge attack. After the 10 seconds, the affected zombie will explode, killing all other zombies around it. The kills obtained from this method count as Headshot kills, allowing one to earn points, XP, and performance camo progress at a faster rate. Brain Rot ammo is super effective against Fire Catalyst zombies, causing them to explode in a high-velocity blast.

Brain Rot can be added to any weapon, independently of its upgrade level for 2000 essence at the Pack-a-Punch machine. However, it will never activate on attacks dealing more damage than the target's health, making it less desirable on some weapon (the Knife, for example) and unusable during Insta-Kill.

Brain Rot functions similarly to past games. Every Brain Rot ammo has a chance to infect an enemy zombie that will attack other zombies for 15 seconds (20 with the Tier II upgrade) before entering a 40 second cooldown. After that delay, the zombie will either die or explode and deal toxic damage(if the ammo mod is upgraded to at least Tier I). The turned zombie will see its health bar becoming green and the mention "Brain Rot" next to it. Unlike its Black Ops 4 counterpart, the kills obtained from Brain Rot do not count as critical kills and only give 50 essence each.

Brain Rot can activate on all zombie types, excluding Elite and Boss class Zombies with Special class enemies such as the Mangler requiring the purchase of the Tier IV upgrade before they can be turned. While under the affects of Brain Rot, Special class infected will retain their abilities but will preference to melee enemies.

It is possible to pet a turned Plaguehound or Hellhound by standing close to it and interacting with it which gives 50 point on the first execution.[1]

Weapons modded with Brain Rot will deal an additional 2x damage multiplier to Mimics and Tempests.

Starting at Level 48, players can upgrade Brain Rot's effects with the use of Aetherium Crystals.

Brain Rot can be obtained at the Altar of Covenants at the cost of one black heart after completing an objective. It works the same way as it did in Black Ops Cold War. Boom Schreiers nor Sturmkriegers can be affected with Brain Rot. 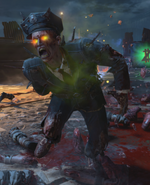 An example of a zombie affected by Brain Rot. Note the green-hue in the eyes and the green smog around the zombie.

The Icon showing Brain Rot is equipped on a weapon with Black Ops: Cold War. 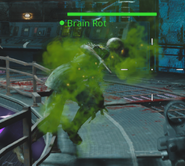 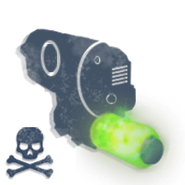 The Brain Rot icon within the Pack-a-Punch Machine menu.