For a mission with a similar name, see New World.

Finish security sweep with Hesh and Riley.
Meet with Team 2 at the wall.
Backup team at LA River checkpoint.
Take out enemy choppers with the MAAWS rocket launcher.
Report to Fort Santa Monica for mission briefing.
Get in the back of the MATV.
Report to Elias with Hesh.

"Brave New World" is the second campaign mission of Call of Duty: Ghosts. The mission involves scouting the area for Federation activity then rendezvous with Elias at Fort Santa Monica in California.

After Logan and Hesh regroup in Los Angeles along with Team 2, another element recon team, the group split up to scout the area of possible Federation activity. Along the way they are engaged by hostile forces, recon teams gathering intelligence on possible routes into Fort Santa Monica. They make their way towards a massive concrete wall surrounded by Federation troops. After taking down two Federation helicopters, Logan, Hesh, and Riley board an MATV and arrive in Fort Santa Monica, regrouping with their dad, who gives them their next mission, to be deployed deep behind enemy lines, into No Man's Land. 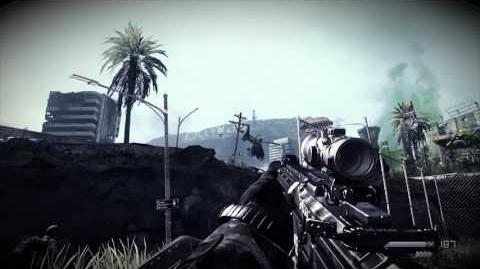 Retrieved from "https://callofduty.fandom.com/wiki/Brave_New_World?oldid=2386034"
Community content is available under CC-BY-SA unless otherwise noted.