Call of Duty Wiki
Register
Don't have an account?
Sign In
Advertisement
in: Call of Duty: Modern Warfare 2 Factions
English

Unknown (supplied by Alejandro Rojas and his assistant)

For other uses, see Militia.

The Brazilian Militia is an enemy faction in Call of Duty: Modern Warfare 2. They reside in Rio De Janeiro where they come into conflict with Task Force 141. They are also a playable multiplayer faction. Their faction symbol is a blood-red handprint. Rather than a real, official militia, they are little more than a criminal gang, but they are a very large and well-armed one, sporting a colorful mix of civilian garb and military hardware. They appear in the two campaign missions Takedown, and The Hornet's Nest as well as the three special ops missions: Bomb Squad, Alpha, and O Cristo Redentor.

Unlike common gangs, the Militia is very well armed and numbers in the hundreds. It is likely that they comprise the entire gangster population of Rio. Though not the most efficient soldiers, they are sufficiently well-equipped and well-led to prove a very serious threat to Task Force 141, using their numbers and hardware to put up a heavy fight. Speculation is that Alejandro Rojas, their main supplier, struck a deal of some sort with them, since they protected him when he was hunted down by the Task Force 141, or they may have thought that Task Force 141 is there for the simple mission of killing them.

Some mistake them to be allied with Vladimir Makarov and the Russian Ultranationalists, although that is not possible. Their only connection to them is through Rojas, who supplied Makarov the weapons for the terrorist attack in Russia. They use weapons built locally in Brazil, and Russian weaponry such as the AK-47. They also use attack dogs. In battle, they are deceptively formidable tacticians, and will frequently attempt to ambush or flank the player, (Captain MacTavish references this in Takedown, mentioning how they know the streets better than they do) However, they are a lot more foolish on easier difficulties, blind firing frequently and running straight through fire to their deaths.

They are a faction in multiplayer.

A Militia sniper wielding a Dragunov. 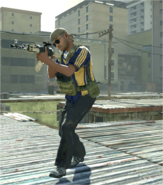 A Militia gunman wielding an AK-47 with an ACOG Scope attached. 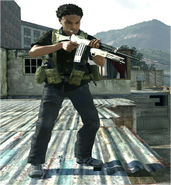 A Militia gunman wielding a FAL with an under barreled shotgun attachment. 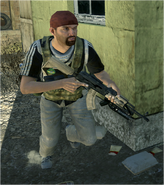 A Militia gunman wielding an AK-47.

A Militia gunman wearing a bandolier and using a FAL. 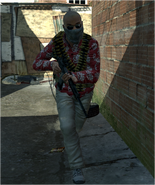 A Militia gunman wearing a bandolier and wielding a FAL.

A Militia gunman wielding a Mini-Uzi. 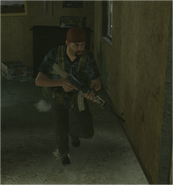 A Militia gunman wielding an AK-47.

A Militia gunman taking cover whilst aiming an AK-47.

Militia walking through the Favela.

A Militia gunman in Last Stand. 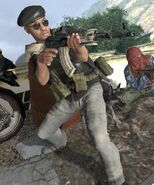 A pair of Militia gunman in the "Museum" bonus level. 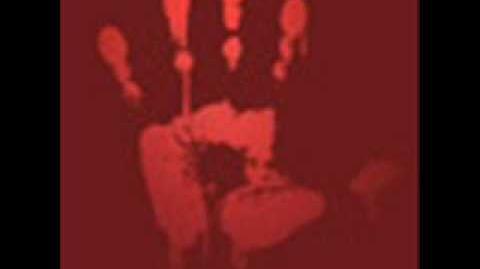