The Breaching Charge, also referred to as Frame Charge, is an explosive designed for gaining entrance through locked doors and walls seen in various Call of Duty games.

In Call of Duty 4: Modern Warfare, a breaching charge is seen in multiple campaign missions, though it is not usable by the player. It is used by Lieutenant Vasquez in "Charlie Don't Surf", and Gaz in "Ultimatum". It is a small explosive attached to the handle of a door to blow the lock. The explosive used in-game consists of a fuse igniter (specifically a M60 Time-Blasting Fuse Igniter), a slightly coiled length of cord which is most likely to be Detonating Cord, and a blasting cap at the end of the cord. The breaching charge does not damage the player even if he stands next to it, compared to scripted C4 everywhere except for in "Mile High Club". 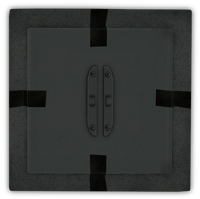 In Call of Duty: Modern Warfare 2, the breaching charge is used much more extensively. In this game it is a "frame charge" — a shaped directional charge taped to a piece of Styrofoam, which is stuck to a door or wall to blast through the entrance.

It is seen in multiple Campaign and Special Ops missions. For a short time following the breach, events will occur in slow motion, allowing players to clear a room before any hostiles can effectively react, as they will be drawing and firing weapons at a much slower pace than normal. In addition, the player's magazine will be loaded to full capacity, no matter how many rounds were present previously.

In order to breach, the player must have a firearm equipped, and the room the player currently occupies must be free of enemies. If player attempts to use an invalid weapon, such as an RPG-7 or a Riot Shield, or is in the middle of a reload or weapon switch, a message will appear stating "Not ready to breach". A similar message will appear if there are still hostiles on the player's side of the door to be breached.

Breaching charges seen in Call of Duty 4 are found on the kitchen table in Loose Ends in Modern Warfare 2.

A breaching charge is used by John "Soap" MacTavish in Find Makarov.

A breaching charge is used by Gary "Roach" Sanderson in Find Makarov: Operation Kingfish to allow the team to reach the room with Makarov's plans.

A breaching charge placed by Roach.

The standard breaching charge used on most doors

Breaching charges are used in the campaign of Call of Duty Online.

Breaching charges can also be used in Multplayer on the maps Octane and Warhawk. Walls marked with a red Ghosts symbol can be permanently blown up to open new lines of sight, destroy cover, or access new paths through the map. Players just walk up to the symbol, press and hold "Use" for 1 second, and a 3-second C4 charge will be placed on it. Players best stay clear of the charge or else suffer damage, possibly death, from the breach's explosion. 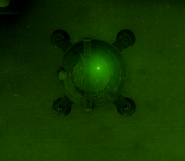 The charge used in "LOKI"

In Advanced Warfare, most breaching sequences are done with the powerful exo punch against doors, but breaching charges are still used in some cases, like in Traffic.

A breaching charge can be seen being used by a ZSF soldier when trying to breach Xavier Hirtzel's room during the mission "New World".

C4 placed to breach a gate in The Wolf's Den