Breakdown is a campaign Eastern Front level in Call of Duty: Finest Hour. When the engine of the tank that Nikolai Badanov and his men were riding on just broke down, they move their tank to a safe place where they can make repairs before the German infantry arrives. However if they don't hold the Germans back until the tank is repaired, they won't be able to escape in time.

The player will start in a large city square after the player's tank gets an engine problem. The task is to protect Sgt. Belinki while he repairs the tank. Firstly, German bombers will bomb the square, so do not run ahead to prevent from being killed by bombs. Straight after the bombing, German infantry will come out of the houses and start storming the tank. The starting weaponry consists of a PPSh-41 and a DP-28. The best way is not to attack the storming infantry but to deploy the DP next to the tank (as seen in the video), or stay behind the fence to the east of the square with a better view, but be careful - that position can be easily flanked, so keep an eye on the sides of the position. After a certain time, Sgt Belinki will repair the tank (as long as the player successfully protected him), and a German tank will come out and a small cutscene will start. The tank will shoot the tower where Lt. Pavelovna is, but she is alive as seen later in the level. The cutscene ends, and a T-34 tank will come from the south-east and destroy the German tank with its cannon. Then the player need to go in the tank by going close to it and pressing the action button when a green control panel emblem can be seen.

Then, radio orders will be received to go to General Belov's headquarters which are under attack, by driving through the city streets with the player's tank. Follow the yellow star on the compass to find the way. Enemy forces in the streets consist of tanks and infantry, some of them will be armed with Panzerschrecks - watch out for those as they can destroy the player's tank. Shoot at enemy tanks with the cannon until the are on fire, otherwise they will not be destroyed and will fire back. The player's task is to eliminate several Panzer IV tanks in the streets. The player's tank has an unlimited amount of ammo for the cannon and the coaxial machine gun, so don,t hesitate to use it. The coaxial machine gun is very useful against infantry, as the cannon takes about 3–4 seconds to reload. It's shots go just slightly to the right of the canon's cross-hair, see the video below. After eliminating the tanks in the city streets, use the yellow star on the compass and the player will reach the headquarters on the wide street next to the river, on the left of the street. German infantry will be coming out from the houses to the right of the street (supposing the player is facing the direction from where he/she came from), and the player will have to prevent them from attacking the headquarters. Watch out for the Panzer IV tank that will be coming straight at the player from the crossroad (supposing the player is facing the direction from where the Panzer came from). After the headquarters have been successfully defended, the player will have to come close to the headquarters and press action button when a green control panel is seen. The tank will be automatically parked. Then the player will climb out of the tank. To finish the mission, the player will have to go inside the headquarters and talk to General Belov. After the conversation is finished, pick up the radio on the table and go to the tank. 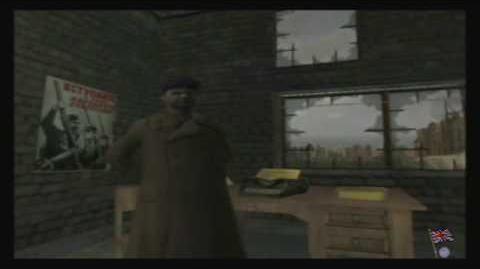 Retrieved from "https://callofduty.fandom.com/wiki/Breakdown?oldid=2517106"
Community content is available under CC-BY-SA unless otherwise noted.