"This is the enemy's last stand. When we take Shuri Castle, we go home. All of us."
— Sgt. Roebuck

"Breaking Point" is the thirteenth mission in Call of Duty: World at War. It takes place in and around Shuri Castle on Okinawa Island, Japan. It is the last mission in the Pacific theater.

Upon starting the level, the player will notice there is no ammo in the M1 Garand given, but a parachute containing ammo will drop. Sprint to the spot and choose a weapon - the guns are: Thompson, M1 Garand, Browning M1919 machine gun and a Scoped Springfield. The Browning M1919 is mostly recommended, as later in the level, in the room with two waiting banzai soldiers in the East building there will be a Type 100 and a Browning M1919 with a good amount of ammo. The Scoped Springfield is recommended as a backup, as the campaign level mostly consists of medium-to-far ranged fighting and the M1 Garand is not always a 1 hit kill, whereas the Scoped Springfield is always with a head or body shot. There are also a few MGs in the level and enemies at a distance which are best killed with a sniper rifle.

The crate has infinite ammo, but it is not recommended to run back and forth after wasting some ammo, as the enemies can mow the player down quickly. After choosing a loadout and reloading, a Japanese ambush squad surrounding the area starts a fight with the US marines. Snipers will appear in the trees, and soon after, enemy mortars will be fired at the player's squad. Quickly, follow Roebuck and Polonsky to cover. Roebuck says that there must be spotters underground as the Japanese knew of the team's position almost immediately. The player is told to go inside and clear it of Japanese forces.

After getting past the part where the player must crouch and walk, cook a grenade and throw it at the group of Japanese who have not noticed the player yet - this will take care of most of them. Use any automatic weapons to gun the rest down. After getting out of it, there will be a large firefight and after this the player will have to destroy Japanese mortar positions. Before the player can pickup and throw mortar rounds, there is a high up MG the player must kill, and many enemies will come out of spider holes and either throw grenades, banzai charge, or spray their weapon.

Be careful if the player chooses one side to just fight on since enemies will only come out of spider holes when the player is near, and Japanese throwing grenades will most always kill the player if they are in range when the grenade lands. Once the player wipes out these forces, go up the set of stairs and prepare for the rest of the battle. Use mortar rounds on tables scattered around the place and in the pits themselves to ease the work. Try to throw them on groups of enemies, into the pits, or just freelance throwing, but beware they are very, very powerful. Throwing one too close will cause the player to die, or get seriously injured. After this, the player will enter what resembles the multiplayer map Courtyard, finally the player will go into a large open field with the courtyard buildings and some sandbags, and this is where the real twist of the knife is.

Some Japanese soldiers will appear to be surrendering, but it is a trap. As Polonsky goes to one and Roebuck goes to the other two to check for weapons, they lash out and activate grenades, and the player must save one of them. If the player saves Roebuck, Polonsky will die, and vice versa. Saving Roebuck is harder, as there are two soldiers, and a grenade is scripted to go off. When saving Roebuck, he is distraught at Polonsky's death and turns into what Reznov is, ordering the player to show no mercy and kill all enemy soldiers. If the player saves Polonsky, similar things will happen, Polonsky will go into a rage and order to show no mercy and starts cursing at the charging attackers.

The player can choose to skip the 'moaning' part and choose between some automatic weapon or the Scoped Arisaka if the player is out of Scoped Springfield ammo. Be aware that the Scope on the Arisaka is unusual and does not use typical crosshairs, and after each shot when the bolt is moved the scope will dramatically sway down and up. Since the Japanese throw smoke and since there are many of them, scoped weaponry is not recommended at this point. An M1 Garand and Browning or Thompson are better weapons at this point.

Many smoke grenades will pour out, and Japanese Banzai Chargers will scream and rush towards the player. Be careful, as it is impossible to see the Japanese soldiers, so stay in cover and prepare to kill any Banzai chargers that will soon run to the player's position. After the smoke grenades are gone, take out a long-ranged weapon (recommended the Scoped Springfield or Scoped Arisaka) and snipe Japanese soldiers until the radio is available. Call in the airstrikes on the building, and look to the right. Similarly, smoke grenades will pour out, but now the player can use the mortar rounds to bring down the enemies.

Still, many Banzai chargers will be spawned frequently, so take care. This time, the building takes two airstrikes to be destroyed. Either snipe the enemies from a far side, or take cover and wait for Banzai Chargers. After calling in the airstrikes on the buildings, the battle ends, and the surviving one of the two (Roebuck or Polonsky) will give the player the other's tag, hinting that they do not deserve his death and are extremely upset and feel guilty of the other's death, even though they could not do anything. But whatever the scenario, it is extremely emotional, compared to the Soviet's campaign's ending, which gives it the better sense of victory.

If the player does save Roebuck, the Xbox achievement/PS3 trophy Guardian Angel is rewarded. On the Xbox it is worth 10 Gamerscore, and on the PS3 it is a Bronze trophy. 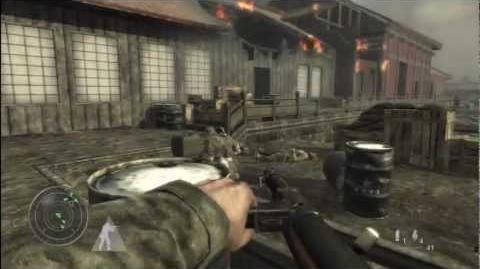 A Marine fires his M1 Carbine at a Japanese sniper.

An airstrike is called in to destroy the building.

) - In the final battle for Okinawa, Save Sgt. Roebuck.

Retrieved from "https://callofduty.fandom.com/wiki/Breaking_Point?oldid=2498219"
Community content is available under CC-BY-SA unless otherwise noted.