The Breda M1930 was the standard light machine gun used by the Royal Italian Army during World War II. It appears in Call of Duty 2: Big Red One and Call of Duty: WWII.

"The M30's closed bolt system allowed the chamber and barrel to heat rapidly, causing rounds to cook off before they were fully in the chamber."
— Description

The Breda M1930 is featured only in the Call of Duty 2: Big Red One campaign and can be found only in the mission "Piano Lupo". During "Piano Lupo", it can be found as a man portable weapon, typically found off of dead Italian soldiers. It has good power and a fairly rapid rate of fire, but its small magazine of 20 rounds may let the player down. All and all it is a fairly decent alternative to the Carcano or the M1 Carbine. Although a bipod is present on the weapon, it is non-functioning.

"Most versatile in class."
— Description

The Breda M1930 returns in Call of Duty: WWII as the GPMG. It was added to the game with the Winter Siege event.

The GPMG is a low damage-per-bullet weapon. It scores four shot kills at every practical range. It has an excellent rate of fire of 722 RPM, tied with the MG 15 for highest fire rate in class. It also has tighter hipfire crosshairs like the MG 42, making the weapon effective at close ranges.

The GPMG's main downfall is magazine capacity. While it has the same standard 30-round magazine as the Bren, it only increases to 45 with Extended Mag, compared to 100 as with the Bren. Another weakness that the GPMG has is its relatively slow reload time. However, the reload time is a bit faster than any other LMG in its class. While it is right in line with the other LMG's in the game, its low magazine capacity of 30-rounds (45 with Extended Mag) makes Hustle a much needed Basic Training if one plans to use this weapon effectively.

When the player equips a Reflex Sight on the GPMG and changes the reticle, the default reticle and the new reticle will both be displayed on the optic. It shared this trait with the Grease Gun before the Grease Gun, and later the GPMG were patched.

The GPMG can be obtained from the Mystery Box in all of the current maps. When upgraded via the Ubersprengen or by Mk. II Freefire special mod, it becomes the Good Enough, this time having ‘explosive rounds’, instead of regular bullets. The Good Enough is fairly a good weapon to use, as its ‘explosive rounds’ can easily stun and kill hordes of zombies. However, as waves progress, the Good Enough can lose its effectiveness, making it useless in the high rounds, and it is recommended to trade it for a better weapon.

The GPMG in first person.

The GPMG mounted with a bipod.

Aiming down the GPMG's iron sights. 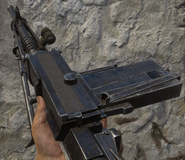 Inspecting a side of the GPMG.

Inspecting another side of the GPMG.

The reticle glitch shown with the Default and Slant reticles