"The Bren is an excellent machine gun in the role of squad support. Its large size limits mobility, but allows it to deliver accurate automatic rounds when fired while prone."
— Manual description.

The Bren gun is the British support weapon of choice. It does high damage, killing in just three shots or less, and has a 30-round box magazine. Its has moderate recoil, but tap-firing can negate this. Its ammunition can become quite scarce. It is very versatile, combining the rapid fire of the Sten with the range of a Lee-Enfield, making it useful in both close quarters and mid ranges. However, its major drawbacks are its relatively long reload time and its weight, slowing down the player's movement considerably. The Bren gun is available to the player during the missions Pegasus Bridge, Pegasus Bridge-Day and Eder Dam Getaway. The Bren gun is Sgt. Waters' main weapon during the level V-2 Rocket Site.

The Bren only appears within the second Sicily mission of Call of Duty: United Offensive, used by Pvt. Higgs. However, it can be picked up by the player after his death.

The Bren gun is issued to the British faction in multiplayer. It does more damage than its German and American counterparts, killing in one shot to the head or chest, and with almost nonexistent recoil, but with a slightly lower rate of fire, longer reload time, and a fairly large blind-spot where the magazine protrudes upwards. It is fairly good in close quarters, only matched by submachine gun users, and can easily take on everything beyond close range except at extreme distances where a sniper rifle is more suitable. 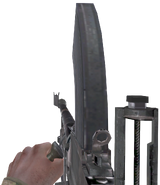 The Bren in first person

"The Bren is an excellent machine gun in the role of squad support. Its large size limits mobility, but allows it to deliver accurate automatic rounds when fired with its bi-pod deployed."
— Manual description

The Bren gun appears in Call of Duty: Finest Hour in the British Campaign, specifically in "Mission: Matmata", "Depot Saboteurs" and "Raiding the Fortress". The Bren is a fairly decent weapon and boasts high accuracy and damage. However it has a slower rate of fire and a small magazine, compared to other machine guns. Like all machine guns in Call of Duty: Finest Hour it has a deployable Bipod which is usable while prone, improving the player's accuracy but inhibiting movement. 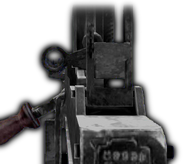 First-person view of the Bren

The Bren gun is the British support weapon of choice. It can deal one-shot kills and fires fairly rapidly, although its ammo can become scarce, with the exception of the final British mission The Brigade Box. In addition, its recoil is high and its reload is lengthy. It is given to the player as a starting weapon during "Holding the Line" and used by Price himself in said mission, making this the only time in the game in which he does not use the Lee-Enfield.

The Bren gun is issued to the British team. It will kill with one shot to the head, but otherwise needs three bullets to kill. Its magazine can create a large blind-spot to the right side of the player's vision, and its reload is fairly long. It cannot top submachine gun users or long-range snipers, but anything in between is free game.

Model of the Bren 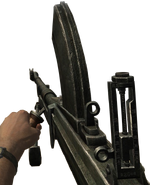 In Call of Duty 3, the Bren extremely powerful and precise, with clear iron sights and low recoil. It can kill enemies in one shot, so it is advised that the player conserves ammunition. Aiming down the sights takes little time, making it very effective in both close-quarters. The reload time is relatively short, but not as short as the Thompson or MP40 reload times. Ammunition is somewhat scarce.

The Bren is not available in multiplayer.

The Bren in Call of Duty 3

The Bren appears in Call of Duty: Roads to Victory. It replaces the Sten on Survival.

The Bren gun was originally supposed to appear in Call of Duty: World at War, however, it was scrapped along with the British campaign. Only a Create-A-Class image, pickup icon, animations and uncompiled weapon files remain in the Mod Tools. In the campaign, the weapon was to appear with bipod and without it. It was most likely replaced by the Type 99, as both share remarkable resemblance except the Type 99's charging handle is located on left side while the Bren's charging handle is located on the right side.

The Bren returns in Call of Duty: WWII, unlocked at level 14. The Bren has very similar statistics to the Gorgon from Black Ops III, with a similarly low rate of fire, low recoil, and high damage, scoring two-shot-kills at all ranges, except when firing through cover. It shares many of the Gorgon's strengths and weaknesses.

An accurate player can use this weapon effectively at medium to long range, and even at close range if one has the advantage of surprise. However, in a ubiquitous one-on-one gunfight, the Bren's poor handling puts it at a disadvantage, as its slow ADS time is liable to get the player killed should they be taken by surprise. As well, its hipfire accuracy is rather poor, and its reload time is lethargic at best. On the plus side, the weapon does boast relatively clean and accurate iron sights, which can be used effectively at even the longest ranges, even with the obstructed view due to the magazine.

The Bren features the usual set of attachments for light machine guns, maxing its weapon level at level 9. The Quickdraw attachment helps greatly with reducing the time to ADS upon a target, as well as Rapid Fire to increase the Bren's fire rate to a slightly more competitive means. The Extended Mag also serves a use, increasing the magazine size to a whopping 100-round capacity and subsequently more reserve ammunition, as well as also decreasing the amount of the sight picture the magazine covers whilst ADS. The Bren also benefits from the use of a bipod whilst equipped with the Armored division, which drastically mitigates the recoil felt as well as decreases the reload time of the Bren and the ADS time whilst deployed.

The Bren also features in the Armored division preset class, equipped with a Full Metal Jacket and Extended Mag.

In the November 9th, 2017 update, the Bren was buffed to have increased damage per shot.[1]

The VMG 1927 is available from the Mystery Box in all maps for 1,000 Jolts and from the Light Machine gun Waffenboxes in The Tortured Path for 4,2500 Jolts. When upgraded either by the Ubersprengen or via the Freefire perk "MK. II" it becomes the Ronnie gaining an increased magazine, increased maximum reserve ammo of 500, increased damage and reloading creates a forcefield around the player, dealing high damage to any nearby zombies. The time of the forcefield is the same, regardless if Schnellblitz is equipped. 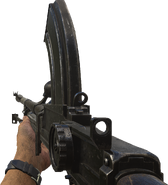 The Bren in first-person. 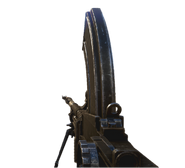 The Bren mounted with a bipod. 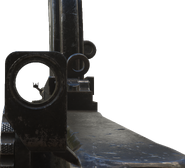 Aiming down the Bren's iron sights.

Inspecting a side of the Bren.

Inspecting another side of the Bren.

The Bren returns in Call of Duty: Vanguard.

The Bren appears as Arthur Kingsley's primary weapon in "The Fourth Reich".

The Bren can be brought into any map via Create-A-Class, at Loadout rarity and can be found at any rarity via the Mystery Box for 950 Essence. When upgraded via the Pack-a-Punch Machine, it becomes the Lockenload.