Call of Duty Wiki
Register
Don't have an account?
Sign In
Advertisement
in: Call of Duty 4: Modern Warfare Cut Weapons

The Brick Blaster is a weapon in Call of Duty 4: Modern Warfare that is hidden in the game's code. It can only be obtained by using console commands.

When shot, it fires a bullet as well as a cinder block. Any bricks fired will remain on the map for a short period of time. When equipped, the ammo counter becomes invisible. The Brick Blaster has no firing sound in first or third-person, and so it is very difficult to tell if a player is shooting one, as the only audible indicatior is the impacts of the bullets and cinder blocks.

The on-screen weapon name calls it the "C4 detonator", and this is seen on pick-up text as well. The Brick Blaster's pick-up icon and killfeed icon is a squished version of the M1911's pick-up icon.

Additionally, when in third person and aiming down the sights, the character will walk in an odd slouching motion, which is not seen anywhere else in the game. Crouching or lying prone will cause the character to start using the bomb defusing animation. In first person, the player holds the Brick Blaster very low to the screen, and when running, and animation not seen anywhere else in the game is used; the player keeps holding it low to the screen, like it's not even moving. When reloading, the animation is a slowed-down version of the regular USP sidearm.

When meleeing with the Brick Blaster, the player swings the pistol instead of preforming the knifing animation. This animation requires two hits to kill an enemy from the back, but when bashing the enemy from the front, it's a one-hit kill, like the regular melee attack.

C4 Detonator can be seen in place of its actual name. 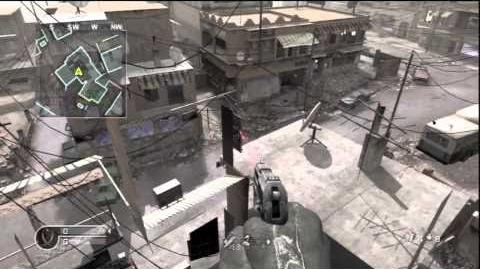