A TV broadcasting station with a parking lot outside and some balconies.

Close-quarters with some medium range combat.

The map contains many long sightlines in the lobby, on the roof, and across the parking lot, but it also hosts close-range combat in the hallways around the central broadcasting room. The parking lot outside is filled with cars and a roof over the middle of it. A small building is located on the edge of the parking lot where snipers can pick off soldiers on the second floor of the TV station. A skylight is above where the bomb area B spawns. A small room that looks over this central broadcasting room is used to attack players trying to capture Flag B in Domination, but enemy players generally begin to toss grenades if one lingers too long. Airstrikes are often ineffective on this map, especially if the enemy team is spawning inside the large TV station.

Broadcast appears in Old School Mode as a supported map. It features a total of 11 sprites.

Loadscreen of the early version of map. 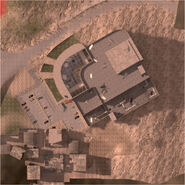