For other uses, see Browning.

The Browning HP is a semi-automatic pistol that is featured in Modern Warfare 2: Ghost and Call of Duty: Black Ops II, as well as in a cutscene in Call of Duty: Ghosts.

Simon "Ghost" Riley uses a silenced Browning HP on the first assault on Manuel Roba's Compound. He also uses it to injure one of Roba's men, and then tortures the man for information.

Close-up.
Add a photo to this gallery

The Browning HP appears in Call of Duty: Black Ops II. It is unlocked for the customized loadout after "Old Wounds." Alex Mason uses the Browning HP to threaten and then shoot Raul Menendez, and Frank Woods uses it to shoot the Cuban soldier who wounded Jason Hudson. 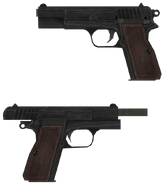 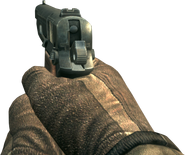 First person view of the weapon. 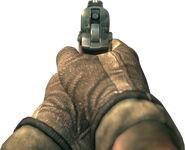 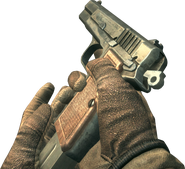 Alex Mason pointing a Browning HP at a young Raul Menendez.
Add a photo to this gallery

The Browning HP is briefly seen in the opening prologue for the Extinction map Exodus. After Samantha Cross approaches the Cortex, the copilot gets up and aims his Browning HP at her.

Add a photo to this gallery
Retrieved from "https://callofduty.fandom.com/wiki/Browning_HP?oldid=2428232"
Community content is available under CC-BY-SA unless otherwise noted.