For another variant, see Stinger (light machine gun).
For other uses, see Browning.

The Browning M1919 (also known as the .30 Cal) is an American machine gun featured in all Call of Duty installments set in World War II after Call of Duty: United Offensive, and in Call of Duty: Modern Warfare: Mobilized as well.

The M1919 is the American light machine gun of choice. It uses a 150-round belt, and can kill in just a few rounds. It is found both mounted and portable, although the portable version is very rare and therefore ammo is scarce. It does not have much recoil, and has fairly good iron sights.

In multiplayer, it is available for both the British and American teams, and uses a 75-round belt. It can still deal one-shot headshots or three shots to the body even at extreme ranges. Its recoil is low, allowing it to be accurate even at max distance, but its reload time is very slow and its rate of fire cannot match a Submachine gun in close range. 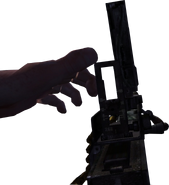 "The Browning .30 Cal is a company-level flexible machine gun. It is most effectively used with its bipod deployed, and can lay down an impressive barrage of fire."
— Manual description

In Call of Duty: Finest Hour, the M1919A6 (also referred to as "Browning .30") appears in only a few levels during the American campaign. As with the MG42 in the game, it cannot be aimed unless prone and with its bipod enabled. It is powerful, and will kill an enemy in one or two hits. It can be found first in the Ghostly Room easter egg on the ground beside the stairs in the level Underground Passage. In Road to Remagen, it is seen by where the German plane is shot down, with only 99 bullets loaded. In Last Bridge Standing, it is in the warehouse district, again with 99 bullets. Later it is found in the level Into the Heartland where it has a lot of ammo, consisting of its full 100-round belt and 300 rounds in reserve. It is very useful for this level, where there are fallen beams with enemies taking cover. Half of the belt will dispose of this, and around 200-300 rounds will be left over for the towers. With the added stock and foregrip, this model of the .30 Cal is the most accurately portable to date.

The .30 cal is only available in the form of a mounted turret. It still has high damage, especially in singleplayer. It also has a high rate of fire and good range and accuracy. Being mounted, its sights are unusable and only a small cross can be used to aim. However, this cross is very small and can easily be used for pin-point accuracy. The Browning also has a lot of muzzle flash, which can obstruct the player's view.

It is still only available mounted. It can get one-shot headshots, or three shot kills to other parts of the body. It has fairly good accuracy, but being immobile restricts its use. 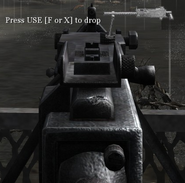 A Ranger using the M1919 in the campaign

In Call of Duty 2: Big Red One, the M1919A6 .30 cal (referred to as Browning .30 cal in the Bonus Materials) appears first in the level Counterattack as a mounted weapon, and appears as a portable weapon in the level Operation Husky. It is powerful, and will usually kill an enemy in three hits or less. When aiming, the player will automatically go prone and aim with the bipod on the ground unless he is standing near a ledge or other objects capable of mounting the weapon.

The mounted M1919A6 can be found in "The Mace" in the trenches when the player advances up the hill, and at the beginning of the last level Chambois in a mounted form to defend against the initial German attack, although the player is likely to take a lot of fire while using it, since it is very exposed. The M1919A6 is very powerful, killing enemies in 1-2 well-placed shots. Because of its infinite ammunition supply, the player does not need to be resourceful when using the M1919A6. The portable version of the M1919A6 that appears in multiplayer does not appear in campaign.

Whereas the M1919A6 is only mounted in the campaign, it is portable in multiplayer. When being aimed, the player automatically goes prone and places the bipod on the ground, although mounting points are available in most maps, such as low walls, windows, railings, etc.

The M1919A6 is very powerful, capable of killing enemies in 3-4 shots. However, at longer ranges it is very difficult to operate, as the iron sights obstruct a lot of the player's view and the player is required to be in prone position when aiming. At incredibly short ranges, the player should not aim the weapon, as this will result in them automatically going to prone position. Therefore, it is recommended that the M1919A6 should be used at medium-short ranges.

The player starts with an M1919 during the missions "Blowtorch & Corkscrew" and "Relentless". The M1919 can picked on the level "Breaking Point". Ammo for the M1919 is scarce and if not used wisely, the player can run out very quickly. One exception of this is in "Relentless", as the large number of Marines killed carry mostly M1919s. It has a very long reloading time compared to the MG42. The M1919 can also be seen mounted and usable on a Russian T-34 in the mission "Ring of Steel". However, it has the firing sound of the DP-28. A different variant of vehicle mounted M1919 featuring a large ringed aircraft sight is also used during the mission Black Cats.

Interestingly, this is the only portable machine gun in the campaign that uses iron sights when mounted with the bipod. When it is mounted, when the ADS button is not pressed, the player will look down the sights; pressing ADS will simply increase the level of zoom. But in multiplayer when mounted it will use the standard aiming cross, except for the one mounted on the T-34 tank.

The M1919's damage is good and consistent. The M1919 deals 40 damage at any distance, which translates into a three shot kill, a two shot kill if both bullets are headshots, or a one shot kill at any range in Hardcore game modes. The M1919 deals the same damage at all distances, meaning that the M1919 is one of the deadliest weapons in long range combat. While rifles, SMGs, and even some other MGs lack some bullet power at a distance, the M1919 has no shortage of it. The M1919 also has very good penetration power, meaning the M1919 can easily shoot through walls with efficiency.

If Stopping Power is equipped on the M1919, the damage is raised to 56 at all ranges. This makes the M1919 a two shot kill at any range.

The M1919's iron sights are odd, as the rear sight is extremely obstructive of peripheral view, but the front post is quite clear. The M1919's recoil is unpredictable, having a moderate amount of recoil going up and to the sides. The M1919's accuracy isn't beginner friendly, but for an experienced player, it's manageable.

The M1919 has a mix and mash of contrasting handling traits. Unusually for a weapon in the machine gun category, the M1919 lets the player move at 100% of the base speed. On the other hand, the hip-fire spread is moderately large, and aim down sight time is slow. The M1919 has one of the longest reload times in the game, taking about 6 seconds to reload the weapon. Players need to conceal themselves away from the battle if they wish not to be killed mid-reload.

The M1919's magazine capacity is tied with the MG42 for the largest in the game, holding 50 rounds in each belt. This is very large, and with the M1919's good power, it makes reloading less frequent. The user spawns with 100 rounds, meaning Bandolier isn't usually necessary

The M1919 has only one attachment available for usage: the Bipod. Using the Bipod is generally not recommended, as the player is forced to stand still, meaning that stray enemies that find the player can easily kill them. Using the Bipod on the M1919 also wouldn't put the weapon to its greatest potential, as it has the niche of a much higher movement rate than other MG's, which is effectively nullified if the Bipod is deployed. An MG like the MG42 would be much better suited for using the attachment, as it is less mobile than the M1919.

The M1919 is available on all Nazi Zombies levels, but only from the Mystery Box. It is widely considered one of the best guns available in Nazi Zombies due to its high damage, large magazine, and high reserve ammo count. It's comparable to the MG42, but with a slower rate of fire, though this can help save ammo. On the other hand, it reloads considerably more slowly than the MG42, making it more dangerous to use when in zombies are close.

In Der Riese, it can be upgraded to the "B115 Accelerator", featuring a higher rate of fire, and more spare ammunition. Since this weapon has a long reload time, Speed Cola and reload cancelling are necessary if one wishes to use it as a front-line weapon. Double Tap Root Beer can increase its rate of fire, this comes at the cost of increased ammunition consumption; tap firing when fighting small groups of zombies can remedy this. Mobility is very slow, so the user will have to sprint to avoid the hordes of zombies.

The Browning M1919 in first person

The M1919 in "Black Cats" used by Petty Officer Locke

USMC, Red Army, SAS
The M1919 in Call of Duty: World at War (Nintendo DS) has the same rate of fire as the console and PC version. The player can carry it, and mount it where there are glowing machine gun mounts. When mounted, it has unlimited ammo, and no recoil, making it a very effective weapon. However the player cannot shoot, or melee while carrying it. Oddly, it is used by all factions except for the Germans, and it is absent from multiplayer.

The M1919 un-deployed. It is unable to be fired until mounted.

Automatic
The M1919 can be found in the Mystery Box, like the console version. It is very similar to the MG42, but with a slower rate of fire, which can be useful when firing single shots.

Getting the M1919 from the Mystery Box

The Browning M1919 in First person

The M1919 appears in Mobilized as a machine gun used by the Insurgents. It is mainly available in a mounted form, but can be found as a portable emplacement which the player can carry and mount it when designated. The 3-D model when portable is the same as the one in World at War on DS with improved texture detail.

The M1919 is the main mounted machine gun of the American forces. Unlike its multiplayer counterpart, the M1919 can be dismounted and used as a portable weapon much like the MG 42, and uses a 250-round belt.

The M1919 appears exclusively in the War Mode, where it is mounted on the American tank. It has a significantly lower rate of fire than in previous installments. To balance this out, its damage is much higher, netting consistent two-shot-kills at most ranges. As well, the obstructive rectangle around the iron sights from previous installments of the series has been removed, and only the front post remains, providing pinpoint accurate sights that can be used at all ranges.

A similar weapon called the Stinger was made available as a portable light machine gun in multiplayer and Zombies with the Attack of the Undead event.