Alive (Resurrected by Scepter of Ra)

Fists, Brass Knuckles, Hammer of Valhalla, Welling, or any weapon obtained by the player.

"He turned from a life of violence, but striking blows is what Bruno Delacroix does best. His savage reputation precedes him, but the only reason he’s back is to help the one person who gave him a chance at redemption when no one else would."
— Official Biography

Bruno Delacroix is a character appearing in Call of Duty: Black Ops 4 Zombies as one of the four main playable characters in the Chaos story.

Bruno is a former gangster with a violent past. He has tried his entire life to escape from it. At some point he ran away and joined the French army before meeting Alistar Rhodes who gave Bruno a chance to redeem himself. Since then Bruno has considered himself in Rhodes debt and will do anything to repay him.

Bruno harbors a large amount of guilt for actions of his past. According to himself he has spilled so much blood that he feared he would drown in it. He seems to hate having to resort to violence but considers it necessary to survive.

Bruno seems to have a special relationship with Shaw. The two appear to be good friends who both have a good amount of respect for each other. Bruno also has a large amount of respect for Scarlett though she distrusts him. Bruno however hates Diego. Much like the others, Bruno considers Diego to be annoying and extremely egotistical.

"Lady McKendrick may be of a higher class than you are "used to" mixing with, huh?"
— Bruno to Diego 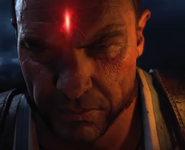 Add a photo to this gallery
Retrieved from "https://callofduty.fandom.com/wiki/Bruno_Delacroix?oldid=2484771"
Community content is available under CC-BY-SA unless otherwise noted.