For the callsign of the CLAW, see Brutus (CLAW).
For similarly named enemy, see Brute.

"You think that this is your prison. That you can repay your debt to existence? This is not a matter of debts, though debts you certainly owe. THIS! Is my life sentence... The reason I was born, and the destiny for which I have bled, and tortured, and killed, and DIED! Again and again. It is Armageddon."
— Warden, Blood of the Dead

Brutus, referred to within the game files as Cellbreaker, and within Call of Duty: Black Ops 4 as the Warden, is a special type of enemy on the Zombies map Mob of the Dead, its smaller Grief variant, Cell Block and the map Blood of the Dead. He first spawns after Rounds 5 and 7 with other zombies, and randomly after that, when the player uses the Mystery Box too much or when the player is present on the Golden Gate Bridge. He is very heavy (as the ground shakes when he runs nearby), deals more damage than an average zombie and has a substantially increased amount of health. When a player shoots off his helmet a loud clatter can be heard indicating his helmet is gone.

In Blood of the Dead, he serves as the primary antagonist and final boss of the main quest, Most Escape Alive. Brutus also appears as a playable Zombies character in Blackout, introduced during Operation Grand Heist. He is unlocked at Tier 45.

He also appeared in the alpha of Call of Duty: Mobile Zombies as a miniboss for the Green Run campaign, as well as an enemy in Shi No Numa and Undead Siege.

According to the Audio Reels in Blood of the Dead, Brutus began to hear the voices of "the dark ones", including that of the Shadowman. Under the influence of the Apothicons, he was responsible for the construction of the Alcatraz Federal Penitentiary, a "temple of concreted and corrupted flesh, tilting on the axis of Hell itself". He would soon be contacted by the Shadowman to execute four mobsters, Salvatore "Sal" DeLuca, Michael "Finn" O'Leary, Billy Handsome, and Albert "Weasel" Arlington in order to transform the island into a pocket dimension, which the Shadowman intends to use as a trap to imprison Primis Richtofen. After executing the mobsters, the Warden is also instructed to follow them by electrocuting himself. On the night of the self-execution, the FBI visit the Warden to question him about his deeds and injustice committed inside the island. As Stanley Ferguson tries to buy some time, the Warden pulls the lever and kills himself, transferring him to the Alcatraz Pocket Dimension in order to prevent the four mobsters from escaping. Upon arriving, Brutus is given a new stronger form by the Shadowman as a reward for completing his role.

During the cycle, Brutus torments the souls of Sal, Finn, Billy and Weasel in an endless cycle, taking the form of a zombified security guard. During the cycle, Brutus is unable to trap Richtofen in Alcatraz when he and Primis arrive to collect the Blood Vials. Eventually, the cycle is broken by Weasel when he manages to kill the other three mobsters.

After the cycle is broken, Brutus destroys Primis' escape portal, forcing them to stay on the island. He continuously attacks Primis in order to extract Richtofen's blood, which served as the key in opening the Dark Aether to allow the rest of the Apothicons to be freed. After a while, Brutus is able to capture Primis, condemning them to cells within the Cell Block. However, the spirit of Albert Arlington frees the four, and with the help of the spirits of the other mobsters, they are able to evade Brutus until they reach Richtofen's lab where a climatic battle ensues, during which Brutus grows bigger in size. Eventually, a version of Richtofen who had fought in The Great War steps out of a hidden cryopod room within the lab and cleanses all of the zombies and releases their souls with the power of a crystal (originating from the Elemental Staff of Fire), effectively ending Brutus's "life sentence" and destroying him once and for all.

Brutus takes the appearance of a heavily armored prison guard. He wears a large, blood-stained, leather combat vest that covers his torso, with a lamp strapped onto his body, two smoke grenades attached to his vest, one on each side, and a security badge on the left hand side of his vest. He wears large metal platings that cover his lower legs down to his boots, and brown, blood-stained gloves. He also wears what appears to be a riot control helmet with a heavily damaged visor. Underneath his heavy armor, he wears a blue guard uniform with a white shirt and a red tie. Covering his torso, forearms, and lower legs, are several chains and lengths of barbed wire, similar to the other zombies on the map. His eyes glow red in most of his appearances, but the exception is in Undead Siege where his eyes glow purple.

Brutus can be heard speaking during several easter eggs, such as when obtaining the Golden Spork, and he can also be heard saying some things upon death, such as, “I will be back!” and, “I will be reborn again!”

Brutus can spawn at any time (apart from the first few rounds), and he spawns somewhere nearby a player, emitting a loud roar (the same roar George A. Romero had in Call of the Dead). The sound of a prison cell opening is heard a few seconds before he spawns giving aware players time to prepare for his arrival. When Brutus is near a player, the ground will heavily shake from his footsteps. This shaking is constant per Brutus; such as if two Brutus' spawn, it can lead to the ground appearing to shake twice as much, and so on.

The player does not obtain any points for shooting him, although shooting his helmet off will yield 250 points to the player who shot it off, and killing him will yield 750 points to the player who killed him, and 500 points to the other players, assuming they are not down. His helmet can be shot off to allow for headshots, which is by far the most reliable and quickest way to kill him. After losing his helmet, Brutus will stand still for a moment, then set off Smoke Grenades. The smoke lasts for approximately 20 to 30 seconds, and can obscure much of the player's vision. Brutus can occasionally spontaneously disappear, respawning near another player moments later in the same state he was in when he vanished.

If Brutus passes by a Perk-a-Cola machine, a workbench, the Mystery Box or the plane, he can temporarily disable and lock it from use, but only if it's powered up via afterlife. It can be unlocked for 2000 points, but this amount will increase by 2000 points each time he locks them within a round. He can also destroy all wooden planks on a barrier if he is near one. He will also drop a Power Up upon death. When Brutus disables each perk machine, workbench, the plane and the current Mystery Box location, the Full Lockdown achievement will unlock.

Brutus is unaffected by the automated Acid Trap and Fan Trap and will disable them if he enters their vicinity whilst they are active, meaning they can only be used as a short distraction. He can, however, be killed by the Tower Trap, if he remains within its radius to sustain enough damage. He also destroys the Zombie Shield in one hit. He is also unaffected by the Acidgat's distracting effects.

While on the Golden Gate Bridge, an additional Brutus will spawn every round, with up to four at the same time. Only the first Brutus that appears when arriving on the bridge will drop a power-up.

In Blood of the Dead, Brutus, who is simply referred to as the Warden, will attack the player as early as Round 1 should they target him or his Hellhounds when he disables the power upon crossing the Catwalk. He will also appear again when the player restores the power within the prison. Gameplay-wise, his basic mechanic remains largely unchanged along with his spawning patterns in normal rounds. Upon his first death, he will not drop a power-up, but rather the Wardens' Key, an item used for the crafting the Spectral Shield and unlocking some locks throughout the map.

Main article: Mob of the Dead/Quotes#Brutus

Model of Brutus. Note the absence of his helmet. 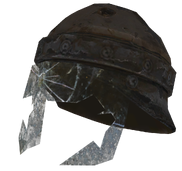 Model of his helmet with a shattered visor.

Another view of Brutus.

Close up shot of Brutus.

Brutus emerges from the Warden's Office in the intro cinematic of Blood of the Dead.

Brutus in-game after being killed.

The Warden's deceased corpse, before he became Brutus as seen in Blood of the Dead.

Brutus thanks Primis for playing into his plan.

Brutus fighting Primis as seen in the Blood of the Dead poster. 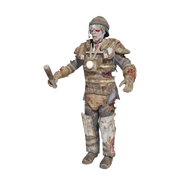 Brutus, as seen in Call of Duty: Mobile.

The Warden in Undead Siege