"Order more! Capitalists love to overindulge!"
— Bubby in Redlight, Greenlight once interacted with

Bubby[1] (known as "murderbot" in the game files) is the Burger Town mascot, featured in the Call of Duty: Advanced Warfare Exo Zombies map Infection. The achievement MEAT IS MURDER requires the player(s) to activate Bubby as part of the Easter egg.

Upon activation, his eyes will become red and he'll pick up the sign next to him and help kill zombies for one round, as well as instant killing any Goliath Zombie he may encounter. However, he will subsequently explode when the round ends and drop four power-ups for the player(s).

Bubby also appears in Call of Duty: Black Ops Cold War in the level Redlight, Greenlight at the fake Burger Town created by the Soviets in a training facility. Bell can interact with Bubby by pressing the button on his side. If pressed multiple times the M79 will be ejected. 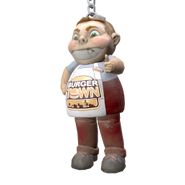