"Charge forward leveling all enemies in your path."
— In-game description.

Bull Charge is a payload for Merc.

Bull Charge allows players to charge forward once the payload is ready, killing enemies unfortunate enough to be in the player's path. Bull Charge also can allow the player to cover a distance in a short amount of time. However, it is highly advised to use this payload as a means to earn multikills rather than a means of getting to objectives faster. The payload can stop prematurely when the player runs into a wall, corner, or piece of obstacle that cannot be moved over without jumping, resulting in the entire meter to become wasted. 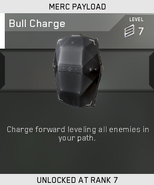 Bull Charge being unlocked in Multiplayer.

"Charge forward leveling all enemies in your path."
— Description

The Bull Charge returns in Call of Duty: Mobile as an Operator Skill. It was added as part of the Season 3: Tokyo Escape update.

Bull Charge is a shield that is used while charging around. Any enemies hit by the shield will die instantly, and on some occasions, kill with count as a headshot. The Skill takes less time to charge than other skills, like the Gravity Spikes, and while in motion, variously things can stop and force the player out of Bull Charge: Hitting a wall, killing three enemies and running out of charge.