The Bulldog, referred to as MAUL within game files, is a semi-automatic shotgun featured in Call of Duty: Ghosts and Call of Duty: Advanced Warfare. It has the highest rate of fire of all shotguns in the game, but the lowest damage per shot.

The Bulldog is available in Multiplayer. It is the cheapest shotgun of its class, costing only 6 points. Unlike the Campaign counterpart, the Bulldog has 6 rounds per magazine. The Bulldog possesses the highest firecap of all shotguns, allowing players with strong trigger fingers to empty the magazine quite rapidly. In its effective range, the Bulldog can kill in one or two shots, despite having the lowest damage per shot in its class. Two great attachments right off the bat are Muzzle Brake and Extended Mags. Muzzle Brake increases the effective range, allowing for better consistency in one shot kills, whilst Extended Mags increases the size to 9 shots, which can negate the downside of a small magazine that constantly needs to be reloaded due to the high fire rate. Slug Rounds is a mixed bag on this gun, as it upgrades the damage immensely, but using it in the sense of a typical Bulldog, and you might waste your entire mag trying to just kill one person, so be aware of that. The Silencer is another option if players want more stealth, but is a terrible option otherwise. An optical attachment is largely unneeded as the hip-fire spread is accurate enough, and the iron sights can be used when necessary, despite being too plain.

The Bulldog has high damage, killing many enemies in a few shots, some even in one. It has the highest magazine capacity of all the Shotguns in Extinction, plus has the fastest reload speed. However, a weapon with farther range may be better because, although many Cryptids use close-range attacks, some can attack from far away, like the Scorpion. Also, due to its fast reload speed, the player might not need to try to upgrade the Weapon Specialist class until they get a faster reload, saving skill points and opening up the opportunity to choose a different class, if they plan to use this weapon.

The Bulldog appears in Call of Duty: Advanced Warfare. 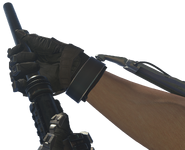 Retrieved from "https://callofduty.fandom.com/wiki/Bulldog?oldid=2166728"
Community content is available under CC-BY-SA unless otherwise noted.