"Burger Town patties are never cooked in a microwave! Only the finest skillets are used to make the burger-licious meat we put inside our customers!"
— Burger Town Employee Handbook

The restaurant appears in the campaign levels "No Russian", "Wolverines!", and "Second Sun", as well as the Special Ops levels Body Count, Homeland Security, and Terminal. It also appears in the multiplayer level Terminal, while near the food court. In the restaurant, the player can see the screens and cash registers, as well as viewing the kitchen.

In the Remastered version of S.S.D.D., a small Burger Town restaurant is inside of a trailer at Fire Base Phoenix.

Burger Town is found in Call of Duty: Modern Warfare 3 located in the map Arkaden and outside the map Downturn, as well as Terminal. Unlike in Modern Warfare 2, the sign for Burger Town in Terminal is written in Russian instead of English, since the setting is Zakhaev International Airport in Russia.

A Burger Town restaurant appears in the Exo Zombies map Infection. This Burger Town has the animatronic mascot, Bubby, there.

The outside of Burger Town in Infection.

A 2019 promotion for the real-life food delivery service Grubhub allowed players of Modern Warfare to obtain several cosmetic items related to Burger Town, such as a calling card and a charm modeled after Bubby.

Like in Modern Warfare, several Burger Town restaurants can be found in Verdansk in Call of Duty: Warzone. 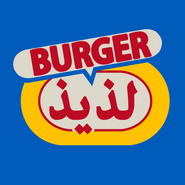 Burger Town logo as it appears in Crash from Modern Warfare.

In CIA Safehouse E9, Lazar is seen wearing a Burger Town shirt with a gun holster. During Redlight, Greenlight, in the training area that resembles a generic American town for the Spetsnaz, a Burger Town restaurant is seen and Bubby can say different phrases, and Woods can remark on it.

It appears in the multiplayer map Amerika and also in the Zombies map Forsaken.

The menu at Burger Town is as follows:

There is also a special offer on a the restaurant where if two kids meals are bought for $5, a poster is given for free.