"Though we've taken the airfield, the enemy still holds onto most of the inland areas of the island. A maze of trenches and artillery positions run right through this whole Godforsaken rock. The enemy's dug in deep and we have to get our hands dirty. Flamethrowers. We'll burn 'em out."
— Roebuck in the opening

"Burn 'em Out" is the sixth campaign mission in Call of Duty: World at War.

After two missions played as Private Dimitri Petrenko, the setting returns the Pacific theater, along with Private Miller. In this mission, the player must wipe out three Japanese mortar pits so friendly tanks can advance. The player will begin with two weapons, the M1 Garand and the M2 Flamethrower.

Private Miller and his squad are pinned down by a turret in a small hut, so the player is told to throw a smoke grenade. Once the player is covered by the smoke, he will advance with his squad. He will then proceed to wipe out one mortar pit, that is down the path in front of him.

Once the pit is destroyed, he will then proceed to destroy the second pit. The player will retrace his steps out of the pit and down the small path, and then take the other path. There will be heavy resistance. After this pit is burned, he will proceed to destroy the third pit, which holds a few more enemies for to face. Once that pit is scorched, the squad will regroup in the pit and the mission will end. 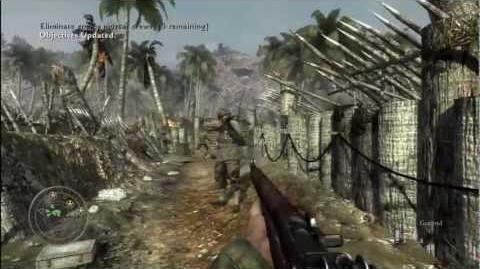 Call of Duty World at War - Campaign - Burn 'em Out

One of the mortar pits.

Walking towards a bunker.

Near an M1 Garand in a bunker.

) - Complete Burn 'em Out on Veteran.