Bus Depot (also referred to as Green Run) is a Survival mode Zombies submap featured in the Green Run/TranZit map in Call of Duty: Black Ops II and a location in the game mode TranZit. It is the first location in TranZit and the Bus spawns here. The M14 and Olympia are available for purchase in the starting area while Quick Revive can be purchased here. There are three doors, all leading out of the starting area to the bus; one door costing 750 points and two doors that require power can be opened by acquiring the objects needed for the turbine. Opening these two doors is highly recommended, for it saves 750 points, and the player(s) can then use it on any other more useful item they desire.

All of the parts for the Turbine spawn inside the starting room. There is a tail located on the floor near the pay phones, a fan in a chair next to a briefcase, and a mannequin body leaning against the bus' route map. In Survival mode, the turbine cannot be built, requiring the player(s) to spend points in order to survive longer.

A lamp used to teleport is located behind the bus, where the ladder is placed. The Bus Depot is one of two locations that has a teleport lamp in its vicinity, the other being the Diner.

The Bus Depot is described as a very tough map to survive. The Mystery Box is the only utility on the map. The only weapons the player has access to (excluding the Box) are the Olympia and the M14 inside the starting room, an MP5 which is located directly across from the starting room area, and a Remington 870 MCS along the walls outside. The Mystery Box is found directly to the left upon opening the door. It is the only spot on the map and therefore cannot be moved via a teddy bear. It is also in a narrow area, meaning it is easier than in other locations to get cornered.

Very right to the Mystery Box, there is a small alleyway that leads safely through the lava to a small area, where zombies come only from the front, which means that the players can camp there, only having to leave to go to the Mystery Box, get power-ups, or buy ammo for a wall weapon. 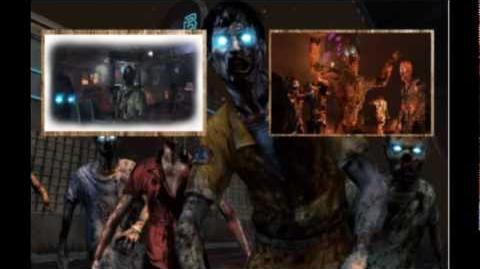 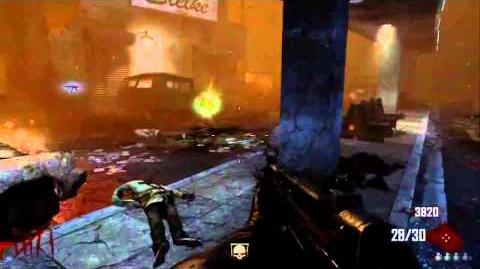