"Flip-action lethal blade that can be armed and concealed quickly."
— Weapon description

"There's something just too fun about twirling the Balisong Knife around."
— Weapon description

The Legendary "Balisong" Combat Knife blueprint resembles a butterfly knife. While statistically similar to the Combat Knife, it features a unique weapon inspection animation in which the player character flips it around. 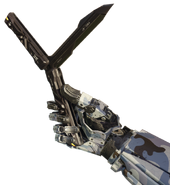 Picking up the Butterfly Knife

Flourishing with the Butterfly Knife

Animated image of the Butterfly Knife's flipping animation
Add a photo to this gallery
Retrieved from "https://callofduty.fandom.com/wiki/Butterfly_Knife?oldid=2537032"
Community content is available under CC-BY-SA unless otherwise noted.