The Douglas C-47 Skytrain was an American military transport aircraft used extensively by the Allies during World War II.

The C-47 is most prominently featured Call of Duty. The workhorse for Operation Neptune, the Allied invasion of Normandy, the C-47 is first seen inserting pathfinders Private Martin and Sergeant Heath into the outskirts of Sainte-Mère-Église to establish a drop zone for the main contingent of airborne forces. After Martin sets up a homing beacon in a field, the primary fleet of C-47's operated by the United States Army Air Force arrives, delivering paratroopers from the 101st Airborne Division and 82nd Airborne Division to the Contentin Peninsula. They continue to do so throughout "Pathfinder", and are seen in the background in "Burnville". At the beginning of Captain Foley's assault on Ste. Mère-Église proper, a damaged C-47 is shot down by a German anti-aircraft battery and crashes in the village.

During the mission Operation Husky in Call of Duty 2: Big Red One, several C-47s can be seen flying over the city alongside WACO Gliders they cannot be interacted with and only serve as scenery.

In Call of Duty 3, two flights of C-47s are seen in the mission "Hostage!". A flight of C-47's fly behind the manor house in which the Feldgendarmerie were holding Major Gerald Ingram captive. Another flight is seen later when rescuing one of the French Resistance members. They serve a purely cosmetic function and serve no purpose to the gameplay.

The C-47 appears in Call of Duty: Vanguard in the campaign mission Operation Tonga. Multiple transports can be seen during the Invasion of Normandy. A C-47 commanded by Henry Baker was later destroyed along with himself.

The C-47 appears in Call of Duty: Warzone. It is the vehicle that drops players off into Caldera. 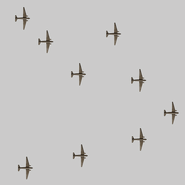 A C-47 just prior to crashing in Ste. Mère-Église