The C4 is constantly seen in the campaign as the primary tool to destroy key objectives, where the player would have to arm the explosive and travel to a safe distance before detonating it. An example of this would be in the level "The Bog", where the objective is to destroy the ZPU-4 in order for a friendly helicopter to pass by. The player also destroys an electric tower with C4 in the level "Ultimatum".

The C4 is a first tier perk and the player will get two when it is used, it has a higher damage and splash damage than the Claymore. When the perk is used, press left on the D-Pad and a detonation trigger will be pulled out, then by pressing the special grenade button (L2 on PS3, Left Bumper on Xbox 360) (ADS button in PC version) the C4 will be thrown, which will stick to walls, cars, etc. Pressing the equipment button (R2 on PS3, Right Trigger on Xbox 360) (attack button in PC version) will then detonate the C4, albeit with a .83 second delay. Alternatively, C4 can be detonated by double tapping the reload button (use button in PC version) while the player's main weapon is out.

The C4 is a questionable choice in multiplayer modes due to the necessary remote detonation of the C4, which may prove troublesome for snipers and is commonly used by those who wait for someone to walk into the C4 then detonate it. The Claymore is a preferable weapon for Sniper players who rely on actually sniping, negating the need to an eye on the C4. They often have no time to detonate the C4, whereas the Claymore detonates automatically when an enemy walks in front of it.

Throwing a C4 charge in.

USMC, SAS
The C4 used in Call of Duty 4: Modern Warfare (Mobile) is used to take down radio towers in the level, "Civilian Town". Instead of it being thrown and remotely detonated, it is placed and ticks down for some time before exploding.

C4 appears in Call of Duty: Modern Warfare 2 as an explosive used by Task Force 141 and by the U.S. Army Rangers. It appears in three campaign missions, "Of Their Own Accord", "Cliffhanger" and "The Only Easy Day... Was Yesterday".

C4 returns in Call of Duty: Modern Warfare 2, this time in the equipment slot instead of via perk. Another change is players are given only one C4. However, the throwing range of C4 is very low, requiring deliberate placement rather than throwing. Also, because it is in the equipment slot, it can be placed with a single button. This is noticeably faster than Call of Duty 4: Modern Warfare's method, which required switching to C4 as a weapon via the directional pad and then throwing it. But detonating is slower, since there's an animation of pulling out the detonator and activating it, in contrast with having the detonator already equipped in Call of Duty 4: Modern Warfare. Campaign retains the method of assigning C4 to a directional pad button. However, C4 will detonate instantly if reload (use on PC) is pressed twice, essentially negating such disadvantages.

As with the previous game it is useful to place it on objectives (I.E. Domination flags, Sabotage targets, etc.) and use it as a mine whenever an enemy nears it. This tactic is particularly useful in Domination, as the announcer will comment on when an enemy nears an objective, making it possible to get defensive kills without having to watch the flag.

It can be used as a rudimentary grenade, but cannot be thrown as far and must be detonated by the player. However, unlike fragmentation and Semtex grenades, there is no warning indicator for a nearby C4 satchel. It also has a larger lethal radius than its grenade counterparts.

C4 will detonate if the player presses reload twice very quickly, (Except on the PC, where the player must tap the "Use" key twice), which can be useful if the player has C4 previously set that needs to be detonated, but already has C4 in inventory from Scavenger or One Man Army. In this case, pressing the equipment button will not detonate the C4, it will simply cause the player to throw another C4.

"Two plastic explosives devices that are detonated remotely with the clacker or by double-tapping "use" button"
— Create-a-Class 2.0 description

CIA, SOG
C4 is first seen in the level "Executive Order," where Mason uses it to blow up a wall to access the controls to the Soyuz 2. It is later seen in "The Defector," where Mason uses it to blow up the ceiling beneath a ZPU-4. It's final use in the level "Victor Charlie", where the player is tasked with covertly planting C4 in a Vietnamese village and running to a safe spot. The player then detonates the C4 to ambush Viet Cong. The only time when the player can use it at will is in "The Defector", when at the end of the mission where the player has to defend the docks. C4 can be found on a crate (like the claymores) and used normally to help defending.

C4 is available in multiplayer for

2000. It can be bought after Create-a-Class is unlocked at level 4. The C4 in Black Ops is almost exactly the same as the Call of Duty 4: Modern Warfare and Call of Duty: Modern Warfare 2 versions (featuring nearly the same skin, but lacking the flashing red light), but the player is armed with two C4s that can be placed and picked up after being deployed, unlike in Call of Duty: Modern Warfare 2. They are deployed via the "aim" button, and can be detonated by either quickly double-tapping the reload button (use key on PC) or using the detonator. The C4 can be thrown much further than in previous games.

The C4's Multiplayer description in Create-A-Class.

Squeezing the Detonator to set off the C4.

C4 was used by John Price and Yuri during their infiltration of Makarov's castle, as well as to cover their escape. Yuri had planted one packet on a bridge column, another on a bottom of a platform, and Price planted one packet on the bottom of an enemy transport truck. It is later used to breach the room where the Russian President was being held captive in the form of C4 belts.

C4 is unlocked at General III (Level 69) in Call of Duty: Modern Warfare 3's multiplayer. It is similar to the Call of Duty: Modern Warfare 2 version, as it can be thrown with only a single button, but has a much higher throwing range. Also, detonation without double-tapping reload or use is faster; tapping the equipment button once deploys the explosive, while pressing the button anytime later will immediately pull out the detonator, click it, and quickly put it away; this takes about as much time to complete as calling in a Spy Plane or Counter-Spy Plane in Call of Duty: Black Ops. However, just like in Black Ops, the C4 in Modern Warfare 3 cannot be resupplied with Scavenger, making it the only Call of Duty game where the player can only receive one C4 per life.

C4 was first seen in Call of Duty: Modern Warfare 3's Special Ops Survival Mode trailer. It can be purchased in this mode in increments of five for $1500.The player can have up to ten at once and can buy more after placing them. However, only twenty can be placed at once; if another is placed, all previous ones are automatically detonated. C4 is a very effective weapon to use against Juggernauts. Up to wave 25, placing five or more blocks of C4 at the site where the Juggernauts are deployed or a spot to lead them to after landing will instantly kill them. C4 is also found strapped on Suicide bombers which will down any player or npc too close to the blast radius. Attack dogs are also strapped with C4, but in later waves.

"A plastic explosive device that is detonated remotely with the clacker or by double tapping 'the use button.'"
— Create-A-Class Description.

C4 returns in Call of Duty: Black Ops II. It is fairly popular, especially when combined with Scavenger and or Fast Hands. This combination is surprisingly potent, allowing for kills over walls and around corners with ease, as well as a backup weapon if a player would normally need to reload while under fire. C4 also carries the benefit of destoying enemy equipment without exposing the player, which is especially useful against Sentry Guns, Guardians and enemies using Assault Shields. Furthermore, it maintains the tactical use as a triggered explosive, when a player is expecting an enemy to appear around a corner.

It is worth noting that hacking the C4 with a Black Hat will steal control of the explosive on the ground, but if hacked in mid air, the explosive will remain in possession of the hacker until it hits the ground, at which point it returns to the thrower.

6
C4 returns in Call of Duty: Ghosts. It performs identically to its counterparts in previous games. The detonator and C4 charge from Modern Warfare 3 is reused for breaching on the multiplayer maps Warhawk, Octane, Fog and Containment. To breach a wall, hold the use button near the wall. The player will place a C4 charge on the wall and then it will detonate a few moments later. An exclamation point will appear on the map when someone does this.

The Detonator for C4 in Call of Duty: Ghosts.

The throwing animation for C4 in Call of Duty: Ghosts as seen in the multiplayer reveal trailer.

C4 makes a minor appearance in the Exo Zombies map Carrier, where it can be received from the Weapon Disposal Machine. It plays a role in the Easter egg Flotsam & Jetsam, where it is used on the vault to end the game after placing the 4 tablets at the same vault in the Gun Deck.

C4 is used by the Special Ops unit to destroy Barriers.

C4 returns in Call of Duty: Black Ops III. It has noticeable differences to its counterparts in previous Call of Duty titles. The C4 has to come in contact with a hard surface before it can be detonated. It also has a proximity detector to indicate when an enemy is nearby.

"High explosives that stick to surfaces and can be detonated remotely with (R2/RT) or by double-tapping (Circle/X)."
— In-game description

C4 returns in Call of Duty: Infinite Warfare[1] and is unlocked at level 41. It performs very similar to pre-Black Ops III games, as you do not have to wait for it to land to detonate it. It also loses the ability to tell the user when someone is near the C4.

As with the previous game it is useful to place it on objectives and use it as a mine whenever an enemy nears it. This tactic is particularly useful in Domination, as the announcer will comment on when an enemy nears an objective, making it possible to get defensive kills without having to watch the flag.

It can be used as a rudimentary grenade, but cannot be thrown as far and must be detonated by the player. However, unlike other types of lethal equipment, there is no warning indicator for a nearby C4 satchel. It also has a larger lethal radius than its grenade counterparts. 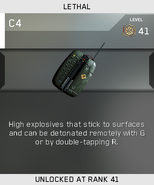 C4 being unlocked in multiplayer.

"Large explosive that sticks to surfaces and can be detonated remotely with <key> or by double tapping <key>."
— In-game description.

The C4 returns in Call of Duty: Modern Warfare.

"High explosive charge that sticks to any surface. Deadly when stuck to vehicles. Detonate with <key> or by double tapping <key>."
— In-game description.