The C8 is an android that appears in Call of Duty: Infinite Warfare. It also appears in multiplayer a scorestreak, known as the R-C8.

The C8 is encountered throughout the campaign. It first appears in Operation Port Armor when it is fought by Nick Reyes and his team during the fight for the Gateway. It also appears in other missions, such as Operation Taken Dagger.

The C8 is equipped with two large shields, similar to the Retractable Shield, to protect it from gunfire. It carries a heavy weapon, allowing it to deal substantial damage. On top of all this, it has a substantial amount of health. However, the C8 can still be suspended in the air by Anti-Gravity Grenades.

C8s can also fire Fragmentation Grenades and Anti-Gravity Grenades from a launcher mounted on their back.

The C8 also appears in multiplayer as a scorestreak, known as the R-C8. It is unlocked at level 27 and is earned after achieving a 1450 scorestreak. It is called in similarly to the A.G.R. from Call of Duty: Black Ops II in that it is airdropped onto a marked location designated by the player. The R-C8 sports a Gauss Cannon on its right arm, and two shields on its left arms. The R-C8 can be controlled by A.I. or by remote control. When being remote controlled, the player can only operate in two dimensions, featuring the inability to jump.

The R-C8 uses its shield autonomously or at will by the player if attacked by an enemy. 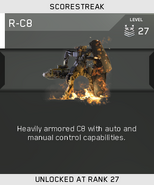 The RC-8 being unlocked in multiplayer.