The CARV.2 is a bullpup tactical rifle featured in Call of Duty: Black Ops Cold War. It was added on May 6th, 2021 as part of the Season Three content for the game.

The CARV.2 can be brought into any map via Create-A-Class, at Loadout rarity. It was added to the Mystery Box and Trials rewards pool as part of the Season Three: Reloaded update. When upgraded via the Pack-a-Punch Machine, it becomes the Carv-o-matic, gaining a new 6-round burst firing mode and a base 60 round magazine paired with 480 rounds in reserve.

For the weapon with camouflages, see CARV.2/Camouflage.

The CARV.2 in first person. 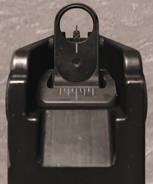 The default Iron Sights of the CARV.2.