The CH-47 makes three appearances in the campaign. In U.S.D.D. as the helicopter which transport Alex Mason to the Pentagon, in S.O.G. as a few of the helicopters taking off and flying in the beginning and in Redemption where several of them are seen flying above the US Navy ships.

Like the MH-6 Little Bird helicopter in Call of Duty: Modern Warfare 2 multiplayer, it drops SAM Turrets, Care Packages, Sentry Guns and Valkyrie Rockets. However, the helicopter is much slower and can be destroyed easily as a result. If destroyed, the crate will fall and land below where the helicopter was destroyed. As with other helicopter-based killstreaks in Black Ops, the CH-47's paint scheme will vary depending on whether it is operated by friendly or enemy forces. It will reward 300 XP upon destroying it, whether it was a care package, SAM Turret, Sentry Gun, or Valkyrie Rocket crate that it was carrying when it was shot down.

The CH-47 Chinook appears very briefly in a cinematic where it collects Frank Woods.

Part of a crashed Chinook can appear as debris in the player's base. 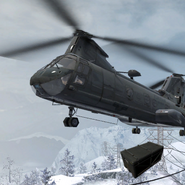 A CH-47 in the Care Package image. 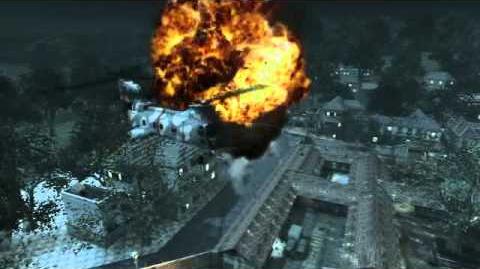 A CH-47 being destroyed in Multiplayer.