In Black Ops, they act as currency that is used to buy weapons, attachments, perks, player character customizations, camouflages, and contracts. The symbol for CODPoints is

Ranking up allows weapons and equipment to be unlocked, as with previous Call of Duty games, but they must be purchased with CODPoints to be utilized. All attachments are available to the weapon(s) purchased, but also must be purchased individually. Every Perk is available from level 4, and must be purchased as well. All Killstreaks Rewards are unlocked for purchase at level 10.

300. In Wager Matches, more CODPoints are earned each game due to the high-risk gameplay of the matches.

1000 is earned when promoted on odd levels, and

2500 is earned when promoted on even levels. These bonuses allow new players to rack up enough points in the first few levels, which can in turn be spent on the first weapons or customization choices. All the player's CODPoints are lost upon prestiging, so excess points should be spent on playercard elements or the ability to put the player's emblem/clan tag on a weapon, which are the only permanent things in the game.

CODPoints return in Call of Duty: Black Ops Zombies as an alternative to gaining points in the conventional method (shooting zombies and building barriers). The points are gained in two ways, either one hundred (100) at a time by playing the game daily, or through micro-transactions ranging from one thousand (1,000) to two million (2,000,000). One's "classic" points must not exceed the amount necessary to purchase the buyable in question, and, at this point, a prompt will appear, showing a slider in place of the typical hand to purchase the item.

Call of Duty Points reappear in Call of Duty Online, simply called CP in game. They appear as an alternate currency alongside Game Points, while GP are earned by playing game, and CP are bought with real money. They can be used to purchase all items in Game Shop or Supply Drops in Black Market. Items like weapons, attachments, equipment and perks, that players haven't unlocked due to the insufficient levels of themselves or their weapons, can still be bought by CP, as a privilege for CP purchase.

For currencies other than CNY, the conversion is done during the transaction.

Call of Duty Points or CP, as they are called in-game, reappear in Call of Duty: Black Ops III, now as a micro-DLC item. They are described as "the universal in-game currency in Call of Duty: Black Ops III to obtain Black Market Supply Drops, Vials to create GobbleGums and other in-game content". As of now, they can only be used to purchase Rare Supply Drops (for 200 points each), Liquid Divinium vials, and for 300 points, buy more Showcase slots as well as more Class Sets.

For currencies other than US dollar, the conversion is done during the transaction.

Call of Duty Points (CP) reappear in Call of Duty: Infinite Warfare, again as a micro-DLC item. They are described as "the in-game currency that can be used in Infinite Warfare to obtain Supply Drops for use in Multiplayer game mode and Zombies Crates for use in Zombies game mode plus other in-game content." They can be used to purchase Rare Supply Drops or Rare Zombie Crates for 200 points each, or for specific bundles for a certain amount.

For currencies other than US dollar, the conversion is done during the transaction.

In Call of Duty: Black Ops 4, CODPoints are used in the Black Market to purchase Reserve Cases and bundles in the item shop.

Call of Duty Points (CP) are present in Call of Duty: Modern Warfare. They are used to buy Operator Packs and other bundles from the in-game store as well as the Battle Pass and each of the individual tier.

CODPoints reappear in Call of Duty: Mobile. They are called CP in-game and retain the design of the Black Ops III CODPoints. They can be used to purchase the Battlepass, Battlepass Tiers, Crates, as well as weapons and skins. 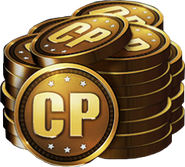 Add a photo to this gallery
Retrieved from "https://callofduty.fandom.com/wiki/CODPoints?oldid=2532632"
Community content is available under CC-BY-SA unless otherwise noted.