"Know your history or be doomed to repeat it."
— Tagline

In May 2019, it was reported that Treyarch would take over the Call of Duty 2020 project following tensions between Sledgehammer Games and Raven Software during the development of the game[1]. On August 4, 2020, Activision announced that Treyarch and Raven Software were co-developing the game which would be known as Call of Duty: Black Ops Cold War[2]. The two studios focused on different parts of the game; Raven Software designed the Campaign mode while Treyarch developed its Multiplayer and Zombies modes.

While sharing "underlying technology" with the revamped engine from Call of Duty: Modern Warfare, Black Ops Cold War used a different iteration of the IW Engine whose tools and technologies were created in 2015 starting with Call of Duty: Black Ops III and rebuilt "to be scalable and broad to work on future platforms"[3]. The technologies included Real Time Lighting which allowed "the lighting to be adjusted in real time during development" as well as global illumination and ray-tracing. The game would also showcase volumetric fog[3]. On the next-gen platforms Black Ops Cold War is expected to support 4K resolution and 120 frame-per-second.[4]

"Black Ops Cold War will drop fans into the depths of the Cold War’s volatile geopolitical battle of the early 1980s. Nothing is ever as it seems in a gripping single-player Campaign, where players will come face-to-face with historical figures and hard truths, as they battle around the globe through iconic locations like East Berlin, Vietnam, Turkey, Soviet KGB headquarters and more."
— Battle.net description[5]

The Campaign mode of Black Ops Cold War was designed and developed by Raven Software which was already designing a campaign based on the Cold War before Treyarch took the project over[6]. The game is a direct sequel to the original game Call of Duty: Black Ops set in the early 1980s and feature returning characters such as Alex Mason, Frank Woods and Jason Hudson while introducing a new cast of characters including Russell Adler.

The campaign was co-written by Murray Kraft, Lead Narrative Designer at Raven Software, and David S. Goyer who was a story consultant on Black Ops and co-wrote Call of Duty: Black Ops II[7]. For its main protagonist, Bell, Raven decided to allow the players to create their own character by choosing their name, race, gender and backstory [8]. The NPC characters will react differently based on the gender (male, female or non-binary)[8]. While Bell will remain silent throughout the campaign[9], players will be able to pick various dialog lines that will change the way the missions would play out. Players will also be able to choose one out of 15 "physiological profiles" for Bell that will slightly affect the gameplay, giving bonus to the players. Choosing "Paranoid" will increase the aim down sight (ADS) speed, "Violent Tendencies" will increase bullet damage, "Lone Wolf" will allow player to sprint longer, "Professional" will give full movement speed while ADS.[8]

Black Ops Cold War will also feature different endings based on the action of the players[9], similarly to Black Ops II campaign. Players will also have the possibility to use different save slots.[9]

In 1981, US President Ronald Reagan tasked CIA operative Russell Adler to hunt down Soviet agent Perseus to prevent an attack on the free world. Adler assembles an elite team of operatives including "Bell" with the help of Alex Mason, Frank Woods, and Jason Hudson. The plot follows Bell either betraying Adler and his group and returning to who they were before the brainwashing, or coming to terms with the fact Perseus's plan would only cause destruction and death in Europe and helping Adler prevent that fate.

There are 16 main missions in Call of Duty: Black Ops Cold War, and each of them is listed below. Depending on the player's choice in Identity Crisis, the mission order will branch out to either The Final Countdown or Ashes to Ashes.

"Bring a Cold War arsenal of weapons and equipment into the next generation of Multiplayer in Call of Duty®: Black Ops Cold War. Engage in deniable operations as an elite operative using state of the art tools of the tradecraft across a variety of experiences from small skirmishes to all out, vehicle-fueled warfare."
— Battle.net description[5]

There are currently 2 modes that have been revealed in the Cold War reveal. VIP Escort, and Ground War. With VIP Escort being entirely new and Ground War utilising a similar basis to the Modern Warfare variant.[10]

Multiplayer mode will feature crossplay and cross-gen as well as a Battle Pass and free post-launch content.

An open PS4-exclusive Alpha was announced on September 16th, 2020 and ran from September 18th to September 20th.

The Alpha featured various sets of weapons, equipment as well as Perks and Wildcards unlocked from the start. Different classic modes were available such as Team Deathmatch, Domination or Kill Confirmed with the brand-new Combined Arms mode.

The PS4-exclusive Open Beta ran from October 10th to 12th. Players who had pre-ordered the game could gain early access to the Beta 2 days prior to the Open Beta on October 8th.

The Open Beta for all platforms featuring cross-play functionality is scheduled to run from October 17th to 19th. Xbox One and PC players who had pre-ordered the game will gain early access to the Beta on October 15th while all PS4 players have access to the Beta.

The Beta features a unique progression consisting of 40 levels which unlock weapons, equipment, perks, wildcards and scorestreaks. The selection of maps is expanded by the new map Cartel. New game modes are scheduled to be available such as: VIP Escort, Combined Arms: Assault and Fireteam. The Beta also includes Frank Woods as an available operator and removes Vargas.

Zombies mode returns in Call of Duty: Black Ops Cold War, featuring a brand new sequel-story to the previous Aether story known as the Dark Aether story starting with the map Die Maschine, which takes place in an abandoned Nazi facility in Poland. For the first time in Treyarch Zombies, the player is able to choose from a selection of various operators including Russel Adler, Lawrence Sims, and Frank Woods, as well as a weapon rarity system, loadouts, and the ability to end the game by calling in an exfil and surviving an extremely difficult wave of enemies. Black Ops Cold War also features the return of original Perk-a-Colas such as Juggernog, Speed Cola and Deadshot Daiquiri with updated machines to fit the 1980's aesthetic (including replacing bottles with soda cans) with a brand-new Perk called Elemental Pop, and puts the player as part of a CIA known as Requiem, an anomalous task-force led by Commanding Officer Grigori Weaver, returning from the original Call of Duty: Black Ops campaign. The game is set to launch with Die Maschine and Dead Ops Arcade 3. Treyarch released the new map Firebase Z as part of Season One on February 4th, 2021. Treyarch then released the new Outbreak game mode on February 25th along with the release of Season Two. Outbreak had many new regions added to it. Mauer der Toten was released on July 15th 2021 inside of Season Four. Forsaken was released on October 7th 2021 alongside Season Six.

With the launch of Season One, integration between the two games began, with all weapons, operators, and cosmetics from Black Ops Cold War being added to Warzone alongside the brand new, Black Ops Cold War themed map - Rebirth Island, a new vehicle (the Attack Helicopter), and a new Gulag for Verdansk based off of Nuketown. Coinciding with the launch of Rebirth Island, a seasonal event themed around the map launched as well.

During Season Two, the lost ship known as the Vodianoy arrived in Verdansk, which in turn carried Nazi Zombies onboard. To coincide with this (as well as the release of the Outbreak mode in Zombies), The Outbreak Event launched. Throughout the season, Zombies began to spread across the map into key points of interest, eventually culminating in The Destruction of Verdansk event which saw Verdansk become entirely overrun by the undead threat and destroyed via nuclear explosion.

Directly after The Destruction of Verdansk in Season Three, Verdansk was rethemed to aesthetically match Black Ops Cold War in Verdansk '84 - adding brand new points of interests and redesigned versions of previously existing locations, as well as the Hunt for Adler seasonal event.

On August 7th, 2020, a short distorted clip appeared during matches inside the Verdansk map from Call of Duty: Warzone (within Modern Warfare). The clip showed two phrases "Know your history" and a phrase in Russian "обречены на её повторение" which translated to "doomed to repeat".

"Doomed to Repeat" (in Russian)

On August 10th, 2020, boxes sent by Activision to several influencers and media outlets were opened. The boxes contained a projector and several slides which led to the discovery of an ARG and a website called Pawn Takes Pawn.

The ARG lasted 9 days and was completed after the community uncovered a page of the website called "/playthegamefindthetruth" which featured the Black Ops Cold War teaser trailer "Know Your History".

On August 26th, 2020, a new playlist titled "Know Your History" was added to Call of Duty: Warzone. The mode, themed around the Black Ops series, tasked the players to complete several contracts. The reveal trailer of the game was shown at the end of the mode.

There are three editions of Call of Duty: Black Ops Cold War available, each varying in price and content. Each edition also features two special pre-order bonuses in the form of the Confrontation Weapons Pack and the Frank Woods Operator Bundle for Call of Duty: Modern Warfare and Call of Duty: Warzone. In addition, pre-ordering any version of the game will give the player instant access to the early open beta.

The Standard Edition of the game is available for purchase for $59.99. It includes:

The Cross-Gen Bundle of the game is available for purchase for $69.99. It includes:

The Ultimate Edition of the game is available for purchase for $89.99. It includes:

Combined logo used in conjunction with Call of Duty: Warzone. 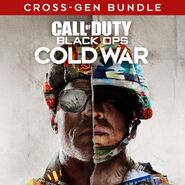 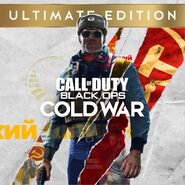