Call of Duty: Mobile (formerly known as Call of Duty: Legends of War, and Elite Squad in its pre-alpha phase) is a free mobile first-person shooter that was released first in Closed Alpha on December 15th, 2018 for Android systems only in Australia[3].

It can be seen as somewhat of a spiritual successor to Call of Duty: Online, due to a similar approach of a "mega-game", as the former had, along with taking several weapons and various other things from the former. However, it is not exclusive (for the most part) to China.

In October 2018, a trailer of a game called "Elite Squad" was leaked. While there are is no official information about this version, looking at available files shows that at this point TiMi Studios where not sure whether they would get the rights to Call of Duty or not. Because of this the game was develped in 2 versions. Some of the assets for the Elite Squad version where called "UNCOD". A lot of the Elite Squad assets still remain in the current files. These include, but are not limited to: weapon UI icons, weapon stat files, loading screens and text files.

On July 18th, 2019, a soft launch began and the first countries that had access were Canada and Australia[19]. On August 15th, 2019, Peru was the new country added in the soft launch.

The medals awarded in multiplayer are based on the medals from Call of Duty: Black Ops II.

A tactical nuke is also achievable with 20 weapon kills without dying.

In an early build of Call of Duty: Mobile (while it was still known as Call of Duty: Legends of War), the Zombies mode featured various linear missions that can be completed in a few minutes instead of the usual round-based gameplay.

In this build, the missions were based on the Call of Duty: Black Ops II map; Green Run.

It featured online, 4-player co-op, and features the return of various classic enemies such as Brutus, the Avogadro, as well as the Napalm Zombie, dubbed "Infernos".

Zombie mode was officially launched on November 23, 2019, and the mode was completely rework compared to the Alpha version launched in Australia in December 2018.

The first map at launch was Shi no Numa and three modes were released: Survival mode and Raid mode where there are two difficulties; Normal Raid and Hardcore Raid. It also features the return of classic Perk-a-Colas Juggernog, Speed Cola, Double Tap Root Beer, Quick Revive, Deadshot Daiquiri, and Electric Cherry, as well as a new system known as Coins, which act similarly to GobbleGum from Call of Duty: Black Ops III. Zombies also features "Buffs", which are cheaper, non-perk slot bonuses that grant the player abilities such as increased weapon damage, increased health, etc.

On February 29th, 2020, Timi Studios announced the Zombies mode will be removed from the game on March 25th, but also stating that they may add the mode back at some point with the map Nacht der Untoten.[20]

In Call of Duty Mobile Zombies, there are three known easter eggs.

The first Easter Egg (achievable only in the Hardcore Raid) is an additional boss known as the "Jubokko", which can be unlocked after activating the elevator and entering the second part of the map. In the center building of there are 4 repair parts that can be picked up spawning both on the first and second floors, however, the Elevator only requires two parts to be repaired. After repairing the elevator the player(s) can activate it which sends them to the second part of the map called Zetsubou No Shima.

This part of the map contains two additional perk machines. Within this section of the map, there are blue plants with the ability to sprout large tendrils. Killing them all will grant the ability to get the codes to fight the Jubokko. The codes can be entered on a computer terminal in the adjacent room highlighted by a flashing red light.

Another Easter Egg involves shooting the blue crystal rock formation in the Northwestern section of the map, doing so enough times will spawn blue skulls. Shooting all the skulls will reward the players with a Power-Up.

Within the southeastern section of the map, in the furthest building, there is a set of pans hanging on the wall. Shooting them all will spawn a total of four blue plants around the map. Destroying them all will reward the players with a Max Ammo.

The Battle Royale mode makes a return in Call of Duty: Mobile. The mode features 3 game modes, 1-player, 2-players, and 4-players modes. One map is available at launch, called Isolated, which features several locations from the Black Ops and Modern Warfare series.

Players can also choose between two camera types, a third-person camera called TPP Shot Mode or a first-person camera called FPP Shot Mode. When you first begin Battle Royale, you’re presented with a quick overview detailing the important game details, designed to get you into the action as quickly as possible, but with an overall understanding of the actions to undertake and the threats to face.

There is fall damage, but it can be easily avoided as the player automatically opens wingsuits when jumping off a high height. However, medium heights can still be dangerous. There are also ziplines for fast and easy travel.

Within Battle Royale, there are twelve classes that the player can choose between at the start of the game that each has unique attributes, including equipment and a perk that are only available for that class.

Only one player per squad or duo can select a class, forcing each person to select a different one.

As of Season 9, weapons and attachments have been changed from something similar to the traditional PUBG style to a rarity system similar to Warzone. From Season 10 scopes are not pre-equipped and can be picked up or swapped. However, scopes can not be swapped from Airdrop Arsenal Loadouts.

Because the game is free to play, it has plenty of in-app purchases. These are all the things players can purchase:

Before Season 9, camos that were Rare or rarer would have perks attached to them. These perks would vary, and higher rarities would provide better perks than a lower rarity.

However, after Season 9, when Gunsmith was introduced, Uncommon and Rare weapons became camo options, providing no strategic advantage. However, Epic and Legendary camos turned to weapon blueprints, which each had their own unique attachment set. Epic rarity would come with four attachments, while Legendary weapons came full equiped. 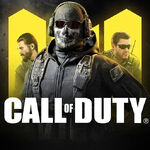 Cover art for the game while it was known as Call of Duty: Legends of War.

Retrieved from "https://callofduty.fandom.com/wiki/Call_of_Duty:_Mobile?oldid=2523832"
Community content is available under CC-BY-SA unless otherwise noted.